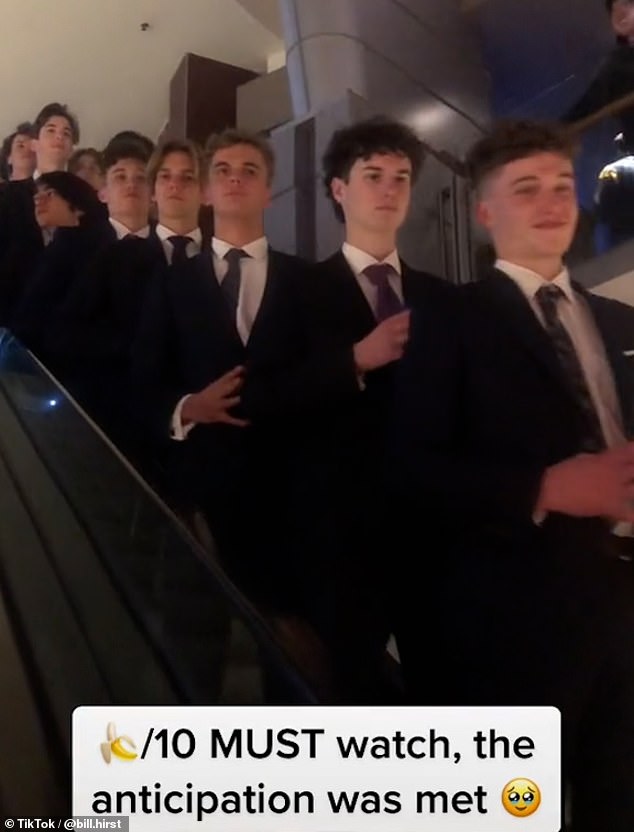 Young men dressed in suits are terrorizing moviegoers at screenings of Minions: The Rise of Gru by shouting and causing a disturbance while the film is on as part of a viral TikTok trend.

Those dressing in suits call themselves ‘Gentleminions,’ and aim to contrast the jokey nature of the film with the seriousness of dressing in a suit to go to the cinema.

The movie centers around a 12-year-old Gru and how he came to meet the small, yellow Minions who have become a staple of pop culture in recent years.

While the trend is fairly harmless, some theaters have taken measures against Gentleminions because of disruptions to other moviegoers.

Reports have circulated of Gentleminions throwing bananas, the minions favorite food, during showings. Others report general rowdiness that detracts from the experience of other viewers, according to the Wall Street Journal.

The sequel to the 2015 film Minions is already top of the box office in the US, making $108.5 million in its opening weekend

One moviegoer reported a teen continuously shouting ‘Go minions!’ at the screen, ultimately taking the fun out of the film for others.

‘People were commenting throughout the movie telling him to shut up,’ he said. ‘It really did like suck the whole movie experience out of it.’

Chipper Lacobucci, who posted a TikTok about his experience as a Gentleminion, told WSJ ‘a bunch of the older people were looking at us, not like we were crazy, but they were laughing at us.’

He maintained that the trend is not meant to ruin the experience for others, but instead have some lighthearted fun.

‘We clapped a little bit but we weren’t doing anything really bad. The people behind us seemed to love it,’ he said.

One theater in Guernsey, England stopped showing the movie altogether because of the incidents with Gentleminions, but eventually started showing it again on one condition: ‘Sadly, no ‘Gentleminion’ suits.’

The manager of the theater told the BBC that the incidents are ‘absolutely heartbreaking.’

‘We’ve had families who won’t even go back into the screen when we’ve tried to sort it out, families leaving before the film has even started, and of course the children have been in tears,’ he continued.

The trend revolves around bringing a large group of friends, dressed in suits, to see the children’s animated movie

Another theater group, Odeon Cinemas, banned ‘any group of guests in formal attire’ from seeing the animated film.

Vue Cinemas has opted for another solution and has tried to separate the Gentleminions from the casual moviegoers by setting up different screenings ‘where you can enjoy the full experience of being a Gentleminion.’

The Vue site says, ‘Please note that these sessions may include crowd participation and general, obvious levels of enjoyment.’

While the film has drawn restrictions in England, it is unclear whether any North American theaters have banned the trend from their establishment.

While Gentleminions appear to have organically originated from social media, Universal Pictures has endorsed the trend, tweeting ‘to everyone showing up to @Minions in suits: we see you and we love you.’

The trend has gained a lot of steam, with TikToks tagged with #Gentleminions amassing more than 28 million views.

It’s unclear tickets whether the trend translated into more sold, but ‘Minions: Rise of Gru’ had an impressive opening weekend in North America, grossing $108.5 million in it’s first two nights.

The sequel to the 2015 Minions film was intended for release two years ago, but was delayed due to the pandemic.