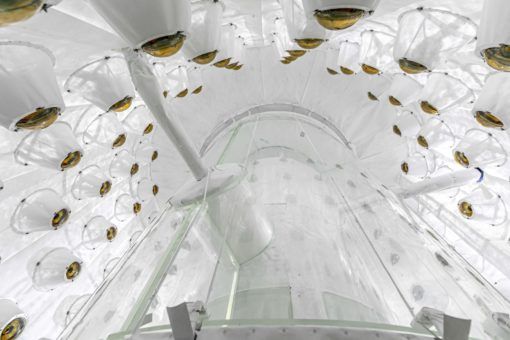 A next-generation dark matter detector has started operations, already delivering its first results, which show it to be the most sensitive machine of this type on Earth.

The machine could help unlock one of the biggest mysteries in physics — the nature of dark matter— by directly detecting its constituent particles for the first time.

Located deep below the Black Hills of South Dakota the LUX-ZEPLIN (LZ) experiment — operated by a team of 250 led scientists by Lawrence Berkeley National Lab (Berkeley Lab) — passed the check-up phase of its start-up procedure with flying colors.

Related: Could the Large Hadron Collider discover a dark matter?

The LZ detector has been up and running since December 2021, and these first results represent its first 60 days of live operations. “We’re ready and everything’s looking good,” Berkeley Lab senior physicist and past LZ spokesperson Kevin Lesko said in a statement (opens in new tab). “It’s a complex detector with many parts to it and they are all functioning well within expectations.”

Dark matter makes up around 85% of the matter in the known universe , but because it doesn’t interact with light it is practically invisible. Likewise, whatever the constituent particles of dark matter are, they don’t interact strongly with other matter either.

In fact, the only way scientists can infer the presence of dark matter is via its gravitational influence which literally holds together most galaxies, preventing their constituent stars from flying apart as they spin.

This means researchers know dark matter isn’t made up of protons and neutrons like the everyday matter — or baryonic matter — we see around us on an everyday basis.

Related: Matter and antimatter respond to gravity in the same way, study finds

The LUX-ZEPLIN detector is set up to specifically search for a hypothesized type of dark matter called Weakly interacting massive particles,or WIMPs. These particles are expected to collide with matter very rarely and interact extremely weakly when they do.

No dark matter particles have currently been directly detected, but the hope is that the LZ detector could change that by detecting the faint interactions of these mysterious particles with xenon atoms. This requires a sensitive detector with all possible noise that could interfere with detection eliminated.

The LZ experiment’s xenon is in two nested titanium tanks containing ten tons of the element in its liquid state. These tanks are monitored by two photomultiplier tube (PMT) arrays which are poised to detect faint sources of light.

The tanks and their attendant detectors also sit within a larger detection system that can catch any particles that could mimic the signal of dark matter and eliminate this from the hunt for real dark matter.

To spot these weak interactions the xenon tanks must be maintained at minus 148 degrees Fahrenheit (minus 100 degrees Celsius). Additionally, the LZ team must remove all natural background radiation from the detector. A water tank surrounds the experiment from the natural radiation emitted by radiation from the lab’s walls.

The underground location of the dark matter detector helps protect it from high-energy protons and atomic nuclei that move through space at nearly the speed of light and originate from the sun and beyond the solar system called cosmic rays.

The LZ detector’s sensitivity will be further boosted over the coming 1000 days, meaning this is just the beginning for the experiment.

“We plan to collect about 20 times more data in the coming years, so we’re only getting started,” LZ spokesperson from the University of California Santa Barbara, Hugh Lippincott, said in a statement (opens in new tab). “There’s a lot of science to do and it’s very exciting!”

The detector’s first results were published on the website (opens in new tab) of the LZ experiments on Thursday (July 7).