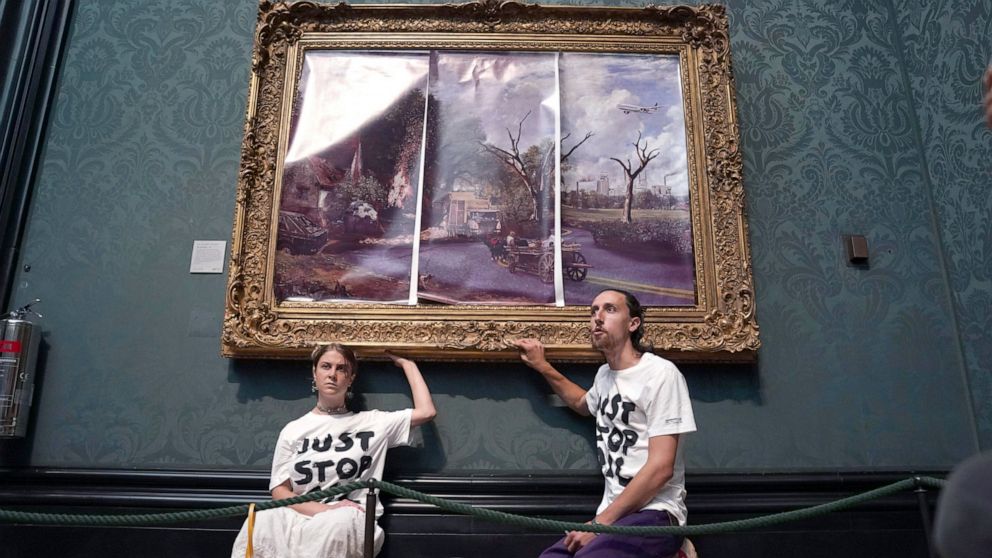 LONDON — Climate change the protesters targeted a copy of Leonardo da Vinci’s “The Last Supper” at London’s Royal Academy of Arts Tuesday, gluing themselves to the painting’s frame and spray-painting “No New Oil” next to it.

The, organized by supporters of the campaign group “Just Stop Oil,” came a day after two protest from the group were arrested after gluing themselves to the frame of John Constable’s “The Hay Wain” in London’s National Gallery.

On Tuesday, five moved into the Royal Academy and attached a hand each to the frame of “The Last Supper,” a full-size copy of da Vinci’s famous 15th-century work.

The Metropolitan Police said three men and two women were arrested on suspicion of criminal damage. The Royal Academy said the gallery room was closed to the public and that police were “called upon the protesters’ request.”

“Just Stop Oil,” which wants the government to stop giving out licenses for new oil and gas projects, has staged a series of attention-grabbing protests over the past week.

On Monday, two reported were arrested after they covered Constable’s 1821 “The Hay Wain” with large sheets of paper depicting “an apocalyptic vision of the future.” They then each stuck a hand on the frame of the oil painting and protested as security staff ushered out tourists and a group of schoolchildren.

The National Gallery said that painting’s frame “suffered minor damage” and “there was also some disruption to the surface of the varnish on the painting,” but both were fixed and the painting was rehung.

Activists from “Just Stop Oil” also disrupted the British Grand Prix race on Sunday when they sat down on the track during a halt in the Formula One race in Silverstone, southern England.