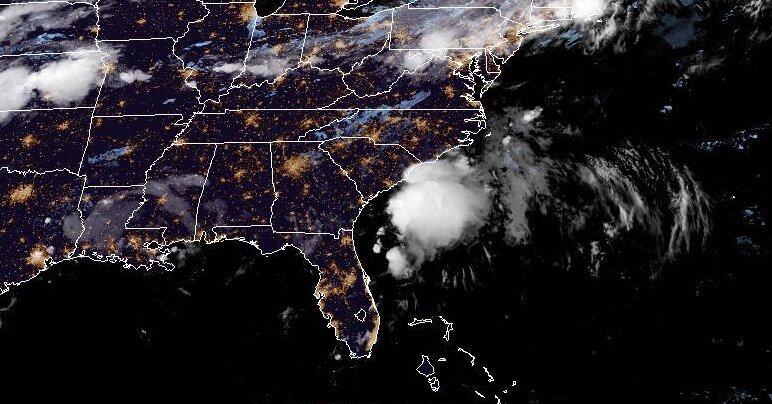 The storm, something of a surprise, formed hours after Tropical Storm Bonnie made landfall in Nicaragua.

Colin was expected to move slowly through the Carolinas over the weekend. At 5 am eastern Saturday, it had maximum sustained winds near 40 mph, and was located just inland over South Carolina.

Forecasters warned that tropical storm conditions were expected in South Carolina on Saturday morning, and into North Carolina from Saturday morning through Sunday. Heavy rain was expected, with some areas reaching up to four inches.

A tropical storm warning was in effect from South Santee River, SC, to Duck, NC

It had been a quiet few weeks for the Atlantic the hurricane season, after Tropical Storm Alex, formed on June 5 and moved through South Florida shortly after. Alex was the first named storm of what is expected to be an “above normal” hurricane season, according to the National Oceanic and Atmospheric Administration. If that prediction comes true, 2022 would be the seventh consecutive year with an above-normal season.

This year, meteorologists predict the season — which runs through Nov. 30 — will produce 14 to 21 named storms. Six to 10 of them are expected to become hurricanes, and up to six of those are forecast to strengthen into major hurricanes, classified as Category 3 storms with winds of at least 111 mph

Last year, there were 21 named storms, after a record-breaking 30 in 2020. For the past two years, meteorologists have exhausted the list of names used to identify storms during the Atlantic hurricane season, an occurrence that has happened only one other time , in 2005.

The links between hurricanes and climate change have become clearer with each passing year. Data shows that hurricanes have become stronger worldwide during the past four decades. A warming planet can expect stronger hurricanes over time, and a higher incidence of the most powerful storms — though the overall number of storms could drop, because factors like stronger wind shear could keep weaker storms from forming.

Hurricanes are also becoming wetter because of more water vapor in the warmer atmosphere; Scientists have suggested storms like Hurricane Harvey in 2017 produced far more rain than they would have without the human effects on climate. Also, rising sea levels are contributing to higher storm surge — the most destructive element of tropical cyclones.