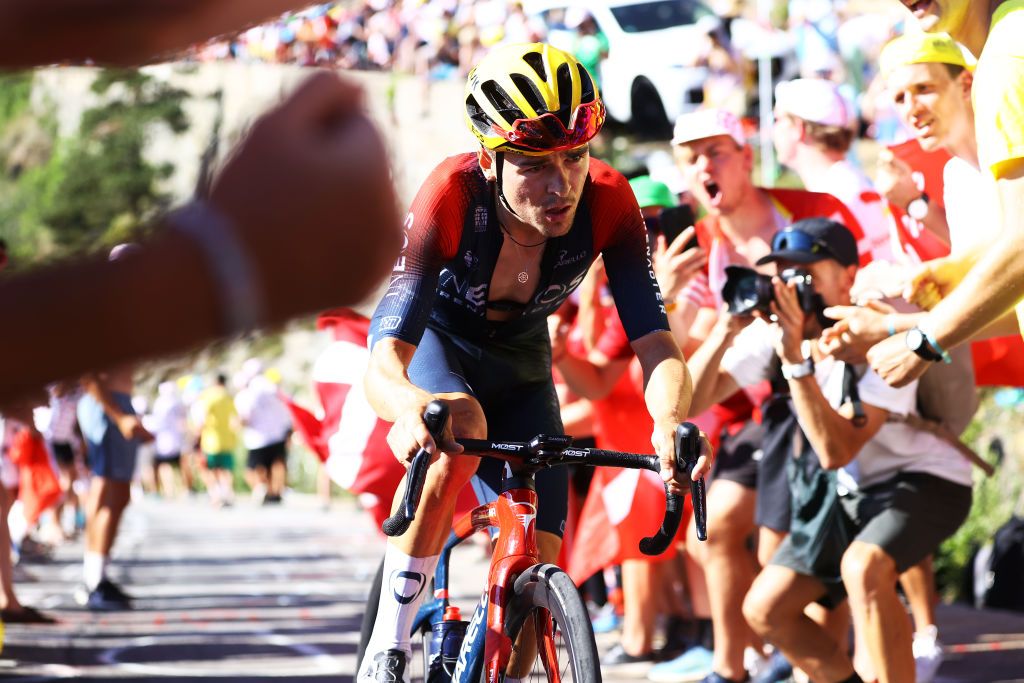 Tom Pidcock said he now has “bigger ambitions” at the Tour de France in the future after claiming his maiden stage win in his first ever Tour.

Pidcock used his off-road honed descending skills to infiltrate the break on stage 11 to Alpe d’Huez and then attacked and dropped his breakaway companions around 10km from the line to claim his first ever stage win at the Tour de France.

Speaking after the stage he said: “I’m ambitious, I’m here to learn and I’ve learned a hell of a lot. I compare myself to [Tadej] Pogačar to Wout [Van Aert]. They’re both older than me and more experienced, but I am ambitious and I think I have bigger ambitions in this race in the future for sure after this experience.”

As well as claiming a stage win Pidcock broke back into the top ten on GC. He now sits eighth, 7-39 off the lead.

Pidcock said the experience of riding the climb packed with fans as he made his way towards only his second win as a professional on the road after De Brabantse Pijl last year, was the “second best” of his life after winning an Olympic gold medal in mountain biking cross country. He ranked his cyclo-cross world title from earlier this third year.

Asked to describe the experience the 22 year-old, who is riding his first tour, said: “No I can’t explain it. You have to just basically pray that everyone’s going to move out of your way. That is the most ridiculous experience ever.”

His team-mate Geraint Thomas, who lifted himself back into a podium spot with a gritty ride in the GC group was clearly happy for the younger Ineos Grenadier. “It’s great to see him [Pidcock] do well. Second Brit to win up here, it’s a nice accolade to have,” he said in a cheeky reference to his own win atop the Alpe in 2018.

“He’s a super talent, he’s been riding really well. He wasn’t great yesterday, but he had the opportunity to go in a move today, and looking at the guys in the break it was possible to do something, a great day.”

Anatomy of a stage win

Pidcock had been marked to go in the break from before the stage on the team bus. He said he was the only member of the peloton warming up on the turbo outside the buses.

Pidcock recalled: “The idea was to get me in the break and win the stage so box ticked, I guess.”

With a headwind on the Col du Galibier, the first of three HC category climbs of the day, the break was controlled by Jumbo-Visma, who have the yellow jersey of Jonas Vingegaard in their team. The plan had been, Ineos Grenadiers sport director Steve Cummings said, to try and follow big groups to avoid spending any energy in the headwind but the only big group was the peloton.

“Froomey [Chris Froome] went and was kind of inbetween [the break and the peloton]. And I thought over the top I’d give it a little dig down the other side,” recalled Pidcock before his tone turned into one of genuine surprise and wonder. “Then me and Chris Froome are riding across to the break in the Alpe d’Huez stage of the Tour de France. Pretty cool.”

Descending like a stone – he had to wait for Froome, an accomplished descender himself, at one point – Pidcock bridged across to set up a showdown across the iconic 21 bends of Alpe d’Huez.

Asked to unpack his descending prowess Pidcock attributed it to years of riding off road on the edge of what traction his tires would offer. “I grew up riding, riding my bike to school every day and I would always detour through the woods. By the time I’d come home my uniform was completely dirty. I’ve become very used to riding a bike and handling it in situations where its on the limit of control.”

He said his breakaway companions were unwilling to help him too much with setting the pace but by the time they reached the bottom of the Alpe they had six minutes and he was confident in a race against four others.

When the decisive moments came no drifting was required, Pidcock accelerated away from his breakaway companions with the vast majority of the final climb to ride.

At one point Louis Meintjes (Wanty-Gobert), who would eventually finish second, was closing the gap. Cummings said he didn’t have to say much to keep Pidcock calm. “I just tried to encourage the riders to think about stuff before they make actions. Tom knows his strengths and his weaknesses, you can feel it much better as a rider on the road, it’s just a reminder that you know, you don’t have to win alone, you can win from the sprint,” he said.

Pidcock didn’t need to sprint he crossed the line alone, shaking his head in disbelief. He can believe it now.