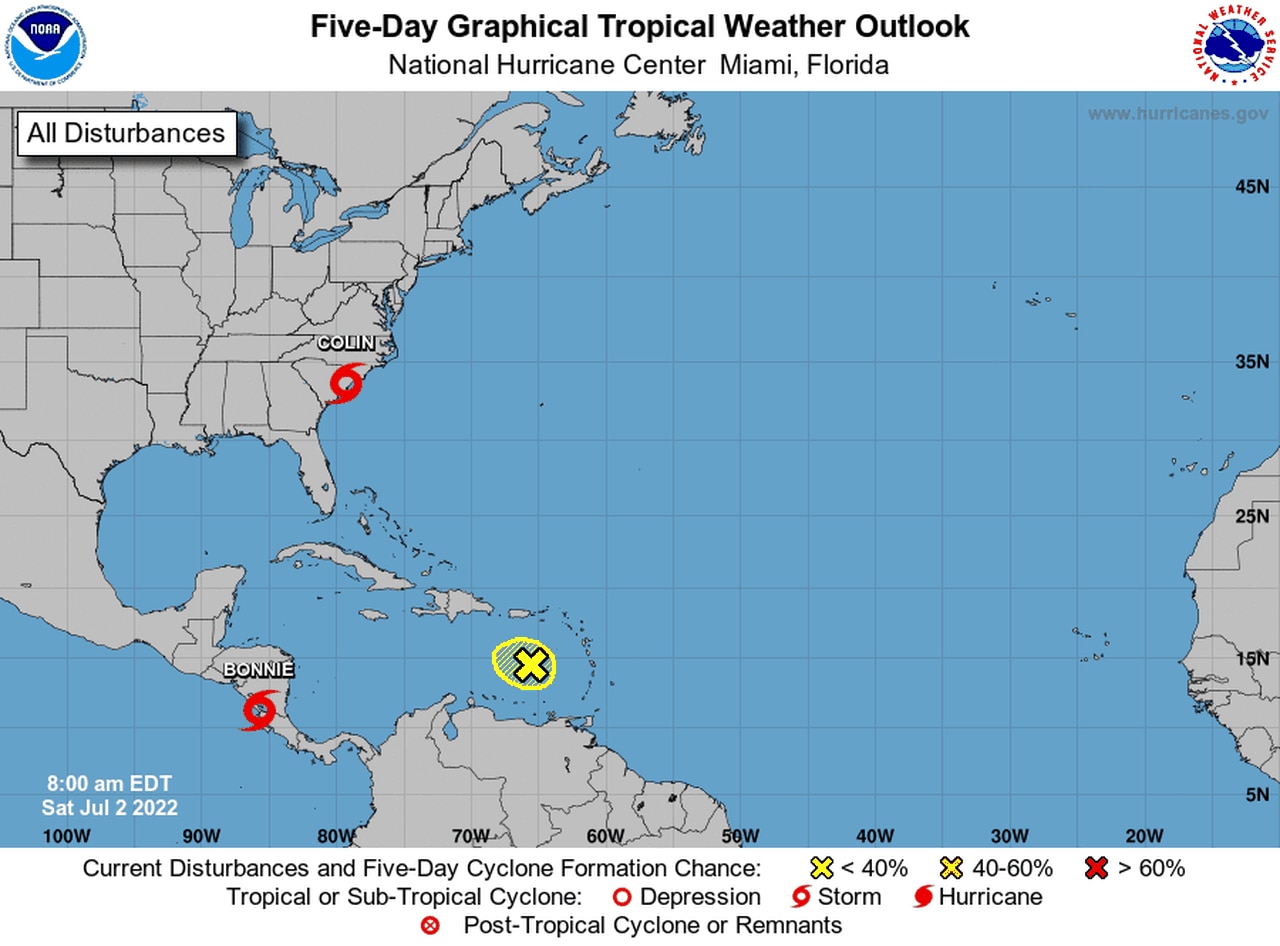 There’s a new storm in town, its name is Colin and it’s on top of the Carolinas.

The National Hurricane Center on Saturday said Tropical Storm Colin has developed — not over water but just inland near the South Carolina coast — and would continue to bring heavy rain and gusty winds to areas along the coast through the holiday weekend.

Tropical storm warnings are now in effect for those areas.

Colin is the third named storm of 2022 in the Atlantic. It’s expected to hug the Carolina coast before turning more to the northeast and moving away from land.

As of 4 pm CDT Saturday, the center of Tropical Storm Colin was located about 50 miles west-southwest of Wilmington, NC, and was on a path northeast at 7 mph.

Colin had 40 mph winds, making it a minimal tropical storm. The hurricane center said little change in strength is expected, and Colin could dissipate by Monday. Colin was losing organization as of Saturday afternoon, forecasters said.

A tropical storm warning is in effect from Cape Fear, NC, to Duck, NC, as well as Pamlico Sound.

The hurricane center said tropical storm conditions are expected in North Carolina this afternoon through Sunday.

The storm could bring another 1 to 2 inches of rain to that area through Sunday morning.

The hurricane center also continued to track Tropical Storm Bonnie far to the south on Saturday.

Bonnie made landfall on the Nicaragua-Costa Rica border late Friday as a tropical storm with 50 mph winds.

Bonnie has moved into the eastern Pacific, where it could strengthen to a hurricane in a few days.

Since Bonnie’s circulation has remained intact, it will get to keep its name even though it is now in the Pacific, which has its own list of storm names.

The last storm that did this was Hurricane Otto in 2016. Otto made landfall on Costa Rica’s Caribbean side as a Category 3 hurricane before heading across that thin strip of land into the Pacific.

According to the Washington Post 18 tropical storms or hurricanes have made the jump from Atlantic to Pacific since 1851.

As of 4 pm CDT Saturday, Tropical Storm Bonnie was located about 130 miles west-southwest of Managua, Nicaragua, and was moving west at 16 mph.

Bonnie was strengthening and had 50 mph winds. The hurricane center said Bonnie is expected to gradually strengthen and could potentially become a hurricane by Tuesday.

Bonnie is expected to parallel to the coasts of El Salvador, Guatemala and southern Mexico today through Tuesday.

All tropical storm watches and warnings for Central America have been dropped as of Saturday afternoon.

ELSEWHERE IN THE ATLANTIC

The hurricane center had its eye on one other tropical wave on Saturday, but it had very low chances of becoming the next named storm.

As of Saturday, the disturbance was in the eastern Caribbean near the Windward Islands. It was moving into an unfavorable environment and had only a 10 percent chance of becoming a depression, forecasters said.