A hot tub sits in muck leftover from the flooding outside the old inn at Manitou Beach. (Libby Giesbrecht/650 CKOM)

Dahlan and Ashleigh Poppl didn’t expect to spend their Tuesday hauling ruined hockey gear and toys out of their garage.

The couple was working until around 3 am Tuesday thanks to a deluge that began Monday night and flooded the lower level of their Manitou Beach condo.

The storm deposited several inches of rain, much of it collecting along MacLachlan Avenue, the street closest to Little Lake Manitou. 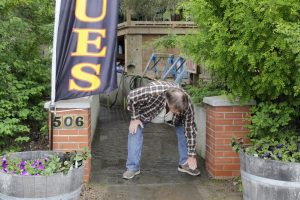 The Poppls live on that street. They said they are waiting to see what’s salvageable, but aren’t holding out much hope even after running pumps all night to try and remove the water as quickly as it rushed in.

Even more devastating for the pair was a call to SGI that informed them their insurance wouldn’t cover this “act of God.”

When Dahlan bought the property, he said water levels were lower and the road in front of their condo was lower as well. Since then, he said both have risen and their home is now situated at the bottom of a bowl carved out by the heightened road in front and a hill behind.

“I didn’t see it coming,” Dahlan said of the damage incurred.

Despite their frustration and stress, the couple joked that just last week Dahlan made the comment to clean out their garage. 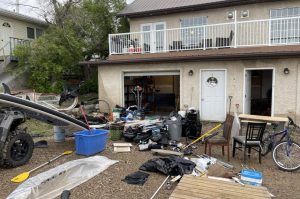 The Poppls’ garage contents — most ruined — in front of their condo after the storm that flooded the lower level of their Manitou Beach home. (Libby Giesbrecht/650 CKOM)

The Manitou Springs Resort and Mineral Spa closed its pool Monday evening because of rainwater seeping into it.

Across the road, an abandoned inn at the corner of MacLachlan Avenue and Winnipeg Street suffered severe flooding. Water reached halfway up the ground-level doors and Mary McNab, who was visiting the area, said she saw patio furniture floating behind the building.

Shairp estimated the community received three inches of rain in about an hour and a half.

To make matters worse, Shairp said he had an unwelcome visitor.

“The tax assessment people decided to come by and ask how it felt about paying taxes,” he said.

“I couldn’t imagine worse timing for the government to send these people around. Everybody is squeegee-ing out their basements and hosing off their driveways and realigning things and cleaning, and this guy wants to pester you about the square footage of your porch.”

In nearby Waterous, Kristy Fossen said the rain came down hard.

“I guess half the town had their basements flooding,” she said. “It was kind of a crazy weather event.”

At one point, Fossen said she had to go outside to tend to her downspouts.

“It was like I had a shower in my clothes,” she said, laughing.