Parents are fuming after secondary school pupils were banned from hugging, high-fiving or shaking hands with each other with a strict ‘no contact’ rule.

Pupils at Mossley Hollins High School in Greater Manchester have also been barred from sitting on overcrowded benches, playfighting and even holding a place for friends in the lunch queue.

‘No student should ever be touching another student,’ the school headed by Mrs Andrea Din in Mossley, Ashton-under-Lyne announced in its latest newsletter.

A current pupil slammed the rules as ‘ridiculous’ and ‘unfair’ after she had to ask a teacher for permission for a friend to hug her after she hurt herself.

SCHOOL KEEP CLEAR… of each other: Pupils at Mossley Hollins High School in Greater Manchester have been banned from hugging, high-fiving, and holding hands after they implemented a strict no contact policy. Parents and pupils have slammed the policy with some saying it turns pupils into ‘robots’ 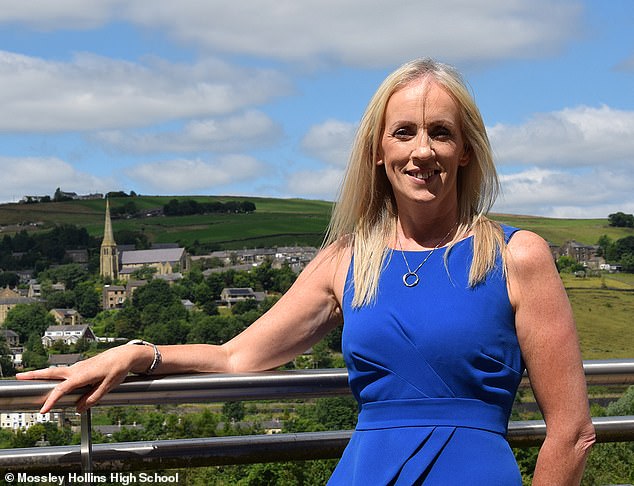 ‘No student should ever be touching another student.’: The school announced the no contact rule in their latest ‘newsflash’ saying it will ‘further improve our positive school culture’, by making pupils ‘good citizens’ and encouraging them to have ‘ mutual respect for each other’. However a former pupil said it was ‘not going down well’ with pupils. Pictured: Head teacher Andrea Din

She commented publicly on Facebook saying: ‘I’m a current student at this school and I was in a lesson and I hurt my fingers.

‘My friend sat next to me had to ask my teacher for permission to hug me?

‘I just personally think that it’s just unfair, having to ask too hug your friend is ridiculous?!’

Parents have also reacted with anger, accusing the 854 pupil co-educational school of turning its children into ‘robots.’

The school said in their ‘newsflash’ that the rule will ‘further improve our positive school culture’, by making pupils ‘good citizens’ and encouraging them to have ‘mutual respect for each other’.

However, a former student said the rules were ‘not going down very well’ with pupils and left them feeling ‘pressured’, the Manchester Evening News reports.

Emma Halpin, who left the school in 2019, said: ‘I used to go to the school, and I still know people there. Nobody seems to be in favor of it, from what I have seen.

‘It does not seem to be going down very well. A lot of students feel pressured with the rules so far.’

The school has faced a barrage of criticism on social media for the strict rule, with one commenter saying: ‘This is one of the most ridiculous things I’ve ever seen in my life! Wow!

‘Teaching children not to show affection to their friends is a sure fire way to give them problems down the line.

‘If my child went to this school I would be absolutely fuming.’

Katie Teasdale posted on Facebook: ‘Physical contact is such a big part of peer relationships like hugs when upset or celebrating, holding hands with best friends, high five as a greeting and shaking of hands in a formal setting.

‘This may have been put in place as part of a safeguarding measure to stop unwanted physical contact but that should be dealt with on a case-by-case basis, not a blanket rule across the school.’

Bill Williams said: ‘So all pupils should be… robots with zero human touch. That is extremely freakish controlling behavior from a warped-minded school.’

David Mayor said: ‘Under these rules children will grow up with a distinct lack of drive and a lack of interaction and confrontational skills.

‘The school yard is usually better for this sort of thing than going to karate classes. I just wonder what the punishments are for disobeying these rules.’

Tameside Council have been contacted for comment by MailOnline. 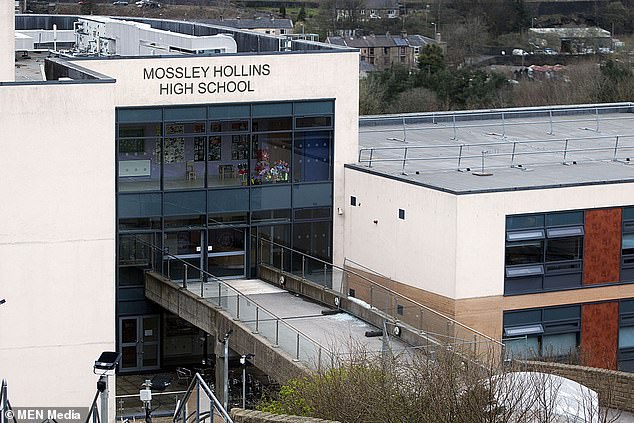 Parents have accused bosses at Mossley Hollins High School in Greater Manchester of a ‘complete failure to understand human needs and behaviour.’ One pupil said that the rules were ‘unfair’ and ‘ridiculous’ after she had to ask a teacher for permission to hug a friend when she hurt herself

In its announcement, the school said: ‘To further improve out school culture, there is now a no contact rule in place. This means that no student should ever be touching another student.

‘No carrying of other students, cuddling, or play fighting will be tolerated. Students must treat others with respect. All students should show good school citizenship at all times (including breaktime and lunchtime).

‘Respect, helping others and following all school rules are necessary qualities for success.’

It added: ‘This new rule has been introduced to ensure that everyone feels safe in school, has a supportive environment in and outside of lessons, demonstrates mutual respect and are kind to each other, has a positive attitude towards each other and has healthy relationships with their peers.’

Under the heading: ‘What does ‘no contact’ actually mean for our students?’ the school pupils warned to ‘always be safe by being careful and showing courtesy.’ It said there should ‘no toy fighting or rough play’ adding: ‘Never push or pull others.

‘Keep your hands and feet to yourself. Physical contact and verbal abuse to others are not permitted. No jumping on each other, cuddling and no carrying of each other. No throwing of any objects. No holding places or jumping in line when queuing for lunch. Sit properly on benches and do not overcrowd.’

It concluded: ‘This new rule has been made very clear to all of our students so that they all understand. Teaching and support staff have led presentations this week explaining our expectations so that every student understands why we are implementing this rule.

The school whose Latin motto: Floret Qui Laborat means: ‘He or she who labors, prospers’ was rated as outstanding following its last Offtsed inspection in November 2014.