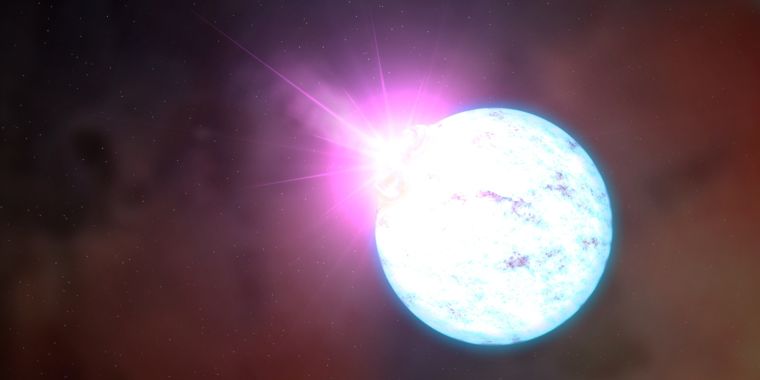 Fast radio bursts are exactly what their name implies: a sudden surge of photons at radio frequencies that often lasts for less than a second. Once scientists had finished convincing themselves that they weren’t looking at equipment glitches, the search was on for what was producing the vast amounts of energy involved in a fast radio burst (FRB).

The discovery of the first repeating FRB told us that the process that generates an FRB doesn’t destroy the object that does the producing. Eventually, an FRB was found that was associated with events at additional wavelengths, allowing the source to be identified: a magnetar, a subset of neutron stars that has the Universe’s most extreme magnetic fields. While that represents excellent progress, it still doesn’t tell us anything about the physics of how the burst is produced—knowledge that would presumably tell us why most magnetars don’t produce them and why the burst tends to start and stop so suddenly.

Now, researchers have identified an FRB that helps limit our ideas about what can produce them. The FRB itself appears to be a single event, but it’s composed of nine individual bursts separated by about 215 milliseconds. The rapid pace means that the source of the burst almost certainly has to be near the surface of the magnetar.

The new work comes out of Canada’s CHIME instrument, which was built for other observations but turns out to be sensitive to many of the wavelengths that make up an FRB. CHIME scans a huge area of ​​the sky, allowing it to pick out FRBs despite the fact that they almost never happen in the same place twice.

The automated analysis pipeline that picks out potential FRB events should have missed an event called FRB 20191221A, simply because it was much longer than FRBs as they’ve been defined, taking nearly three seconds for the radio emissions to ramp up and then drop back down to background levels again. But the data was saved for future analysis because that three seconds appears to contain several independent bursts, and these sub-bursts are what triggered the system to flag the data.

While we have identified repeating sources before, those produced single bursts with a long separation between them. FRB 20191221A, by contrast, had a separation of only about 215 milliseconds between them.

In fact, the gaps between these sub-bursts were remarkably regular. The researchers estimate the probability of detecting something that looks this regular without it actually being regular as one in 10-11giving them “high confidence” that the signal is periodic.

Since that event, there’s been no sign of another event from the same region as FRB 20191221A. It also appears to be from a source that’s outside our galaxy.

Close to the core

But it’s really the periodicity that tells us something about the nature of FRBs. Neutron stars themselves are very extreme environments, so their surfaces can produce the sorts of extreme energies needed for an FRB. But magnetars have extreme magnetic fields that extend the high-energy environment well beyond the surface of the neutron star. (The strength of their fields is so strong that the normal orbitals of atoms are distorted, preventing chemistry from happening anywhere near them.) So, it’s not obvious how close to the neutron star FRBs are generated.

The timing of these sub-bursts argues strongly that it’s on the surface of the star. The millisecond-level separation between events is consistent with the rotation speed of neutron stars that we see on many pulsars. So what we’re seeing with FRB 20191221A might be a broad event on the surface of the neutron star that creates a beam that flickers across Earth with the rotation of the star before fading back out. Given the length of the pulses, however, the source would have to have been far broader than any pulsar we’ve observed.

An alternate explanation could be that the star is rotating slowly, and we’re watching an event that has set its crust vibrating, with the burst of emissions timed to the vibrational frequency of the crust. Again, the extreme nature of neutron stars means that a “starquake” would have far more energy than we’d ever see on Earth.

By contrast, it’s difficult to understand how you can generate this sort of periodicity at a distance from the magnetar without having a periodic source on the star itself.

All of this, however, is based on the assumption that FRB 20191221A is representative of FRBs more generally. By searching CHIME data, the research team has come up with two examples of what appear to be a similar periodicity but with a lower number of sub-bursts. In part because of the smaller number of repeats, however, the statistical certainty about whether they have a regular separation is much lower.

So, while there’s still some uncertainty about how representative FRB 20191221A is, this is the sort of progress that has slowly gotten us closer to understanding FRBs over the last decade. By gradually narrowing down the number of potential explanations, we’re slowly getting closer to understanding what produces these extreme events.