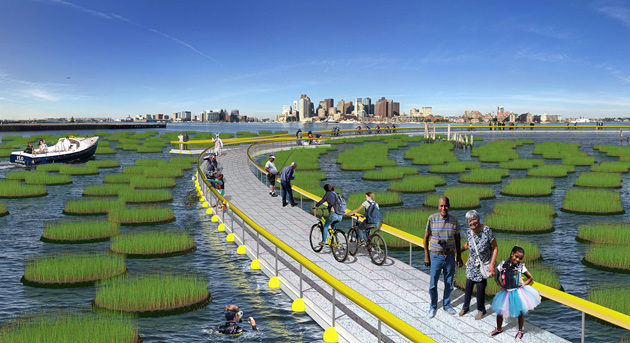 Researchers at Northeastern University are testing a way to protect Boston from storm surges caused by climate change by deploying thousands of biodegradable mats that would grow marsh grasses on top and seaweed below to absorb some of the energy and water that would otherwise slam into Boston’s low- lying areas.

When not combating surges, the Emerald Tutu mats would be installed with floating walkways for people to enjoy nature – complementing the land-based Emerald Necklace.

Researchers have already tested out a single seven-foot-diameter mat off an East Boston pier in the spring of 2021, and are hoping to put down a second one somewhere in Boston Harbor this summer with the help of the Stone Living Lab, which itself is looking at natural ways to combat the sea-based effects of climate change in Boston. A large-scale test involving 100 mats is in the works.

Made up of biodegradable material such as coconut fiber, wood chip byproduct, burlap canvas and marine-grade rope, the mats won’t pollute the environment if they break loose and are lost at sea, [Northeastern civil and environmental engineering Professor Julia] Hopkins says.

She says she was delighted when researchers pulled the East Boston mat out of the water in late summer of 2021 to see what was growing on it and found it was loaded with marine plants.

“It had so much vegetation. We didn’t expect as much grass or seaweed to grow. We didn’t realize it would colonize that easily and that much.”

If installed – the idea would require approval of state and local officials – it would not be the first Boston-area flood-control system that relies largely on vegetation. In the 1970s, the Army Corps of Engineers bought 8,100 acres of marshy and forested land along the Charles River between Medfield and the Boston line to act as sort of giant sponge to absorb flood waters, rather than building a series of levees.