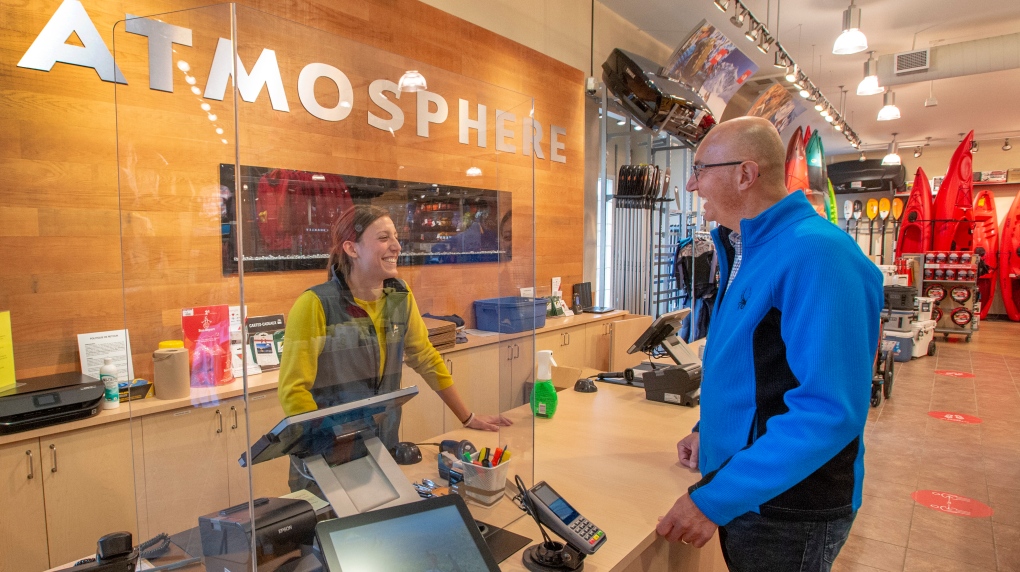 Quebec could recycle or reuse all of the tens of thousands of tons of Plexiglas on its territory, and the fear of a seventh pandemic wave could give it the time it needs to solve the most important obstacle to achieving such a goal: recovering it.

Industries, businesses and institutions (ICIs) that have installed protective signs are reluctant to remove the barriers because of the investment that would be involved in reinstalling them at a time when the pandemic is showing signs of resurgence.

“What I’m told by the Chambers of Commerce is that there is still a fear of a seventh, if not an eighth wave, so there are still a lot of businesses and establishments that are reluctant to let go of whatever they may have put in place,” said Environment Minister Benoît Charrette in an interview with The Canadian Press in mid-May, at a time when cases, hospitalizations and deaths related to COVID-19 were still declining.

“In some cases, some businesses have set up large facilities, and quite elaborate structures, so many are still hesitant to get rid of them, not knowing what will happen next in terms of the pandemic,” he said.

The Co-Eco will be ready to welcome Plexiglas into its regional eco-centres and eco-buildings when it starts to be disposed of.

No one has data on the tonnage of Plexiglas in the region — a tonnage that is unknown in all of Quebec – but Morneau knows that it is significant. Still, she is confident that she can receive it all and has no concerns about its reuse.

“Even before the pandemic, Plexiglas was received at eco-building sites and eco-centres and was gone the same day, five minutes after it,” she said, adding that it’s often artists who want the material as well as those wanting to greenhouse construction.

“We have a waiting list of people who do local agriculture,” said Morneau. “They are asking us to reserve this plexiglass for them for greenhouses. Many local producers have asked us to reserve it for them.”

Co-eco is not the only organization preparing to receive and use the huge amounts of Plexiglas that will eventually become useless, Charette said.

“There are different projects, not on a large scale, not of a nature to recover everything that has been put on the market for a few years, two years now, but still RECYC-QUÉBEC has been able to identify some of them,” the minister said. “There are no projects that have demonstrated the ability to recover all of this material, but we know that there are projects that have been quite successful on a smaller scale.”

WE CAN RECYCLE EVERYTHING

“I’m not at all worried about the quantities to come,” he said. “You’d be surprised at the tonnages we recover, and we can add capacity. We’ve just added a production line at our Montreal site that will increase our capacity by about 30 per cent.”

In fact, Pressé is adamant that Lavergne can recycle all the Plexiglas that is entrusted to it.

“The word Plexiglas is a trademark that has become commonplace,” he says, “but it’s actually polymers that fall into two broad categories: polycarbonates and acrylics (or PMMA, which stands for polymethyl methacrylate). For us, in both cases, there are interesting outputs. We can value these products.”

There is no depolymerization plant in Quebec or Canada that would allow the breakdown of these materials back to their basic components, but Lavergne has been mechanically recycling various plastics for more than 30 years, a process that involves, in simple terms, melting the raw material into a recycled resin, sometimes with the addition of other materials for certain specialized uses.

“We like to say that there is enough plastic to recycle on earth to avoid buying virgin resin for the next 500 years. Our proposal is really to replace virgin resin,” says Pressé.

From Plexiglas-type polymers, for example, the company is able to make ink cartridges or ignition coils for the automotive industry.

Like Charette and Co-eco’s executive director, however, he doesn’t expect to see tens of thousands of tons of Plexiglas.

“I don’t think the volume is going to be that great. I think people will keep them for a long time,” he said. “In the second phase, I think people, when they take them out, will store them. It’s flat, it disassembles pretty well, and it stores well. Some people will put it in their basement or some other storage place for a while and then they’ll say, okay, now we can get rid of it.

“But when that happens, when the managers of public spaces and businesses no longer want these signs, that’s when the real will to solve this problem will be tested,” said Pressé. “Their biggest challenge is probably how to centralize all these signs, how to repatriate these products.”

“The big, big challenge is the recovery,” he said. “There is no organized collection circuit to bring it to the centers that would be able to process it. There is not yet a coordination that (would allow) to recover all the distributed Plexiglas. There are possibilities of deposit with specific companies, but it is not coordinated at the national level, at the level of Quebec.”

RECYC-QUÉBEC is at the heart of efforts to solve the challenge presented by the massive arrival of a plastic material on the territory, but neither the Crown corporation, nor Charette, nor the organizations that favor reuse like Co-éco or recycling like Lavergne, No one in fact, has found the solution to large-scale recovery.

The return of COVID-19, however, will keep Plexiglas in place for a long time, giving the government the luxury of time. If Quebec seems ready to dispose of them, he will still have to find a way to get them where they can be used.


— This report by the Canadian Press was first published in French on July 10, 2022.