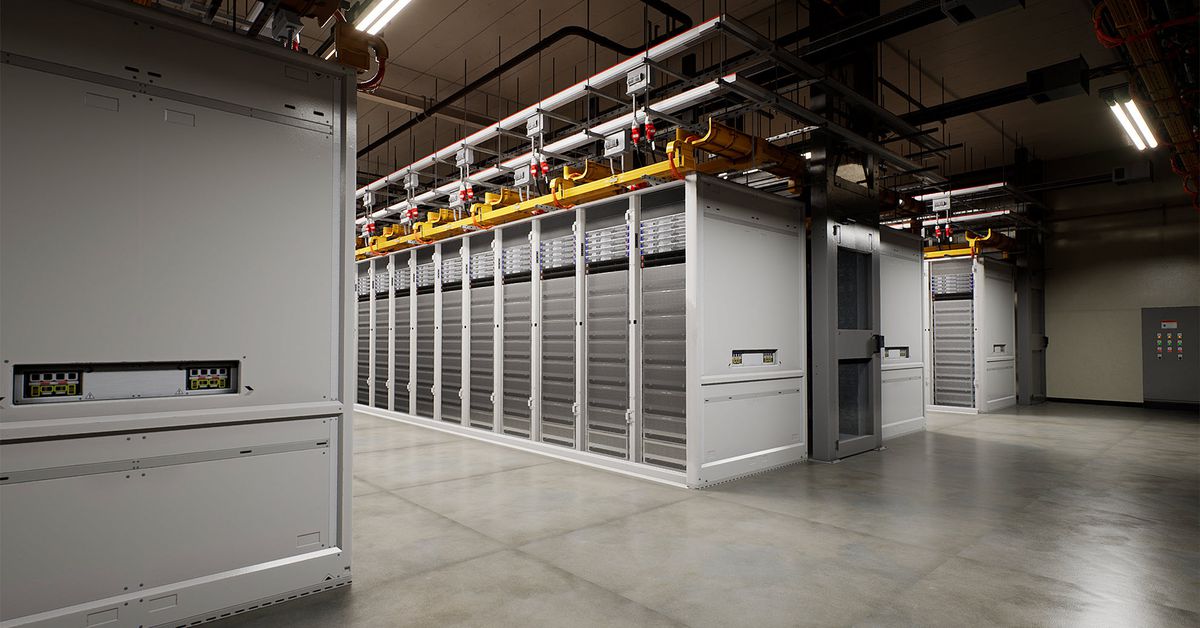 Microsoft says its data centers could soon provide backup power to electric grids transitioning to renewable energy. The data centers already have lithium-ion batteries on-site so that they can keep running during a power outage. Now, that backup system could also shore up grids in need of more batteries to store energy produced by growing numbers of solar panels or wind farms.

That kind of energy storage is absolutely critical for any city or region trying to get its grid to run on renewables. Microsoft’s newest data center in Dublin, Ireland, due to come online next year, will be the company’s first full-scale attempt at providing that service.

Unlike coal or gas, solar and wind energy ebb and flow with the weather. So, while they’ve become cleaner and cheaper alternatives to fossil fuels, they’ll need to come with batteries that can store energy for the grid that can be tapped any time it’s needed. That’s where Microsoft thinks its data centers can step in.

The lithium-ion batteries are part of the data center’s “uninterruptible power supply” (UPS) that usually only kicks in during an emergency. If the power goes out, the batteries typically fill in for a short time — maybe only a matter of minutes — until backup generators are up and running.

In Dublin, the hope is that Microsoft’s big batteries can provide a similar backup for days when the grid starts seeing more energy demand than it can supply from other energy sources. But, instead of only responding to outages, it might actually be able to prevent them. That system could potentially replace the current “spinning reserve” system. Right now, some gas and coal-fired power plants might generate more power than typically needed, called the spinning reserve, in case energy demand spikes or supply from other power sources dips. With batteries available, the need to keep spinning reserve at coal and gas-fired plants could be reduced — along with the accompanying gas emissions.

Microsoft isn’t publicly sharing how much energy its Dublin batteries will be able to provide. But, its data centers typically use “tens of megawatts of power,” according to Christian Belady, vice president of the Datacenter Advanced Development group at Microsoft. So the batteries will likely be able to supply about that much juice. For comparison, a megawatt generated by a power plant might be able to provide electricity for several hundred homes.

That points to just how energy-hungry data centers are. Even though they’ve become more efficient over the years, they still use about 1 percent of all the world’s electricity.

Microsoft said last year that it plans to build between 50 and 100 new data centers a year. That’s a huge expansion from the 200-some data centers it had in 2021. To keep that expansion from derailing goals it set to reduce its greenhouse gas emissions, the company is going to need more renewable energy for its data centers.

At the same time, grids and the data centers they’re connected to will have to deal with the fluctuations that come with more wind and solar energy. So, helping grids maintain a more stable power supply as they bring more renewables online will be in Microsoft’s interest down the line, too.

Microsoft tested out its plan to connect data center batteries to the grid in Chicago, Illinois, and Quincy, Washington, in the past. But Ireland is ideal for rolling out the idea commercially since it relies more on wind for its electricity than nearly any other country in the world. About 35 percent of its electricity comes from wind farms, “which is extremely high,” Belady says. “And so that makes sense to be the first place to start.”