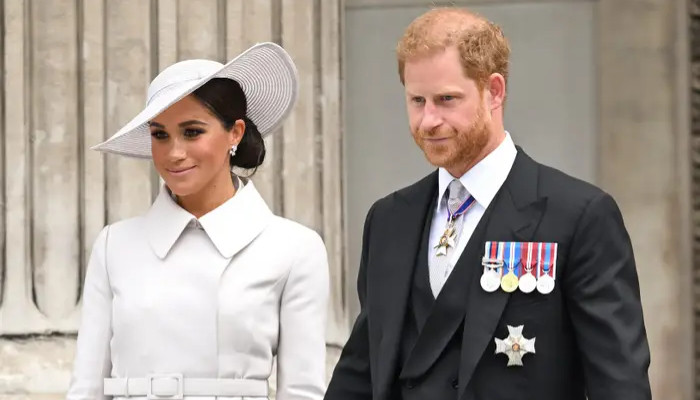 Meghan Markle and Prince Harry may not live full time with the royal family anymore, but a royal expert believes that their presence at the Queen’s Jubilee still managed to ‘raise eyebrows behind Palace walls’.

The Duke and Duchess of Sussex visited the UK for the first time with their two kids, Archie and Lilibet, since Megxit for the Queen’s Jubilee last month, and were notably ‘snubbed’ by the royal family.

While they avoided a majority of the Jubilee festivities, they did attend the thanksgiving service, where they were relegated to second-row seats, and made a separate entrance.

Talking about the same, royal expert Camilla Tominey wrote in The Telegraph: “The Telegraph has also learned that the Sussexes’ decision to take a solo walk down the lengthy aisle of St Paul’s Cathedral for the service of thanksgiving on June 3 ‘raised eyebrows’ behind palace walls.”

She added: “…Not least when they could have walked with Beatrice, Eugenie and their husbands, who were seated next to them in the pews.”

For the unversed, both Prince Harry and Meghan had to walk past Princesses Eugenie and Beatrice and their husbands to get to their seats.

Their second-row status was also scrutinised at length after the event, especially since other members of the royal family including Harry’s brother Prince William and his wife Kate Middleton, were seated in the front-row.