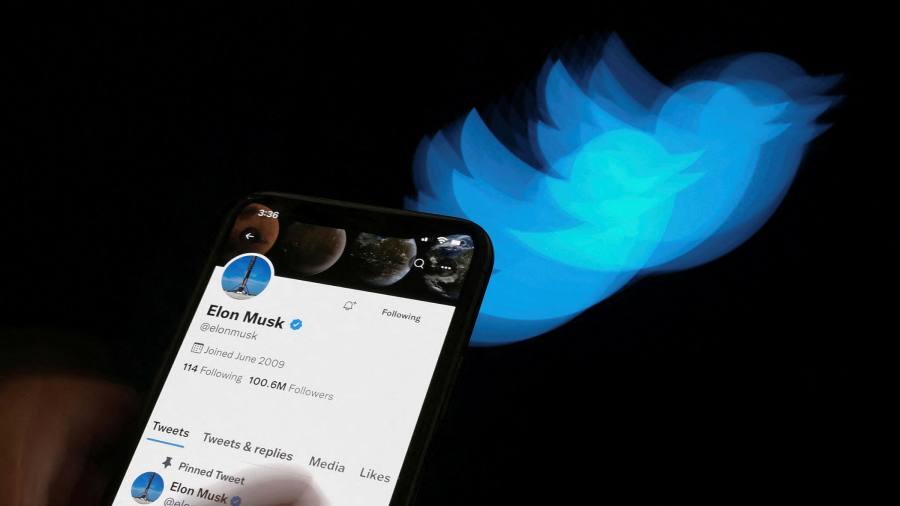 Twitter shares have jumped 8 per cent after Hindenburg Research — best known as a short seller — said it had built “a significant” stake in the social media company that is in a legal battle with Elon Musk.

The move comes after the Tesla chief executive revealed last week that he wanted to pull out of a $44bn deal to acquire Twitter, leading the San Francisco-based group to launch a lawsuit in an attempt to force him to complete the transaction.

“Musk has squandered much of his leverage, largely through misadvised and compulsive tweets,” Hindenburg founder Nate Anderson said in an interview with the Financial Times. “Twitter has a strong case.”

The New York-based firm, which is best known for placing bets against companies, in May closed out its short position in the social media platform. Hindenburg said at the time that there was a significant risk the deal between Twitter and Musk would be repriced lower from the originally agreed $54.20 a share.

“We initially published our short when the share price was at about $48. We closed that out and it was a very good short. Now we think it makes for a compelling long,” said Anderson.

We have accumulated a significant long position in shares of Twitter.

The news comes a day after Twitter filed a strongly worded lawsuit against Musk in Delaware chancery court in an attempt to force him to honor his agreement to buy the social media company.

Musk on Friday said he planned to back out of the deal, alleging that Twitter breached the merger agreement by failing to share enough information on fake accounts.

Twitter rejected Musk’s claims as being made in “bad faith” to escape a high-priced deal during a market downturn, and argued that it was Musk who repeatedly breached the merger agreement.

In particular, Twitter’s lawsuit accused Musk of repeatedly violating an obligation not to disparage the company and its employees, presenting pictures of numerous tweets from the Tesla chief executive in which he alluded to or joked about the deal, or ridiculed Twitter and its leadership.

“Rather than bear the cost of the market downturn, as the merger agreement requires, Musk wants to shift it to Twitter’s stockholders,” the complaint said.

“It tracks the disdain he has shown for the company that one would have expected Musk, as its would-be steward, to protect. Since signing the merger agreement, Musk has repeatedly disparaged Twitter and the deal, creating business risk for Twitter and downward pressure on its share price.”

Anderson noted that Musk had initially said he was pursuing the deal in part to help tackle the number of bots on Twitter’s platform, a point that Twitter also made in its complaint.

Fake accounts were “the worst pretext Musk could’ve decided for terminating the deal”, Anderson said, adding: “It was clearly and very publicly a reason he entered the agreement in the first place.”