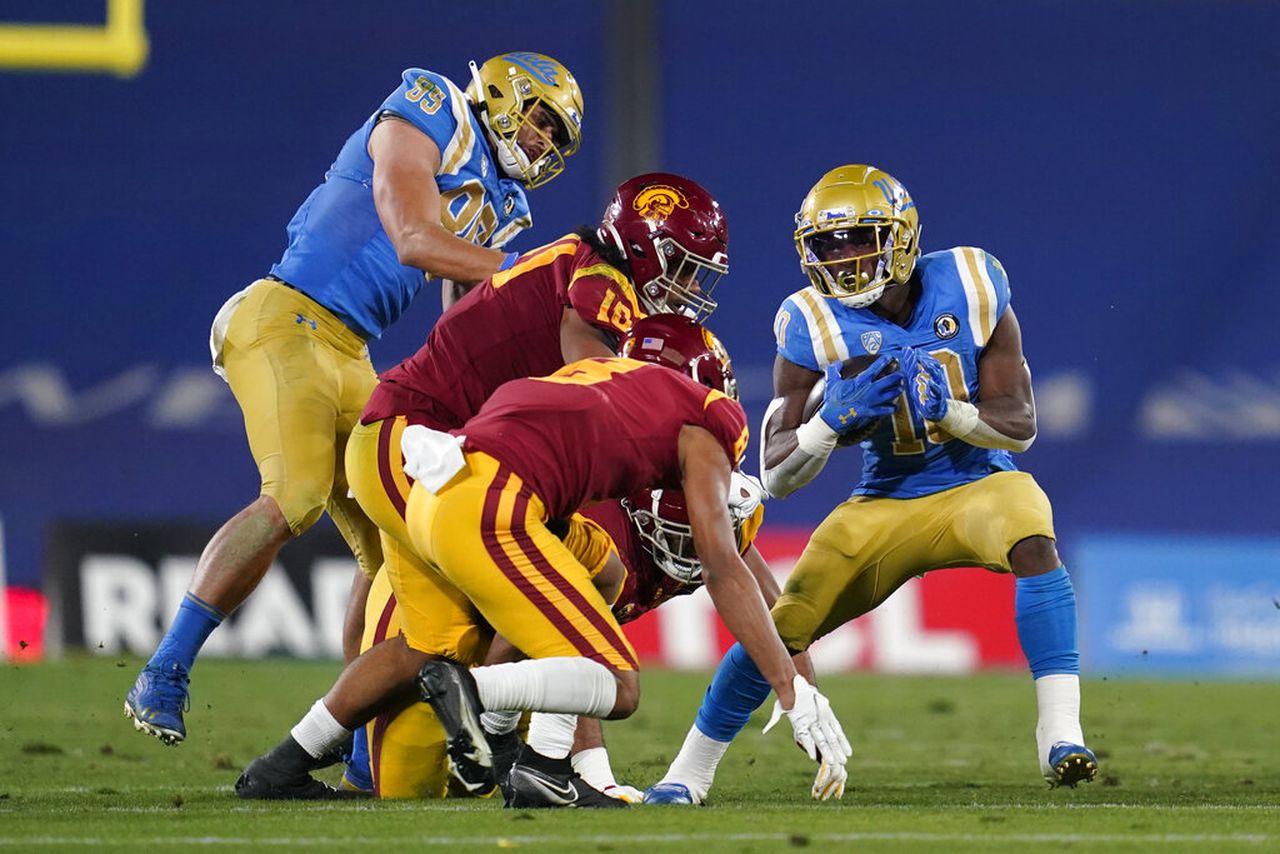 I rose on Saturday morning with the intent to analyze how this insane Big Ten expansion into Los Angeles could be rationalized and developed into a viable model.

But, the more I consider it, the more I want to see the entire Big Ten acquisition enterprise led by FOX Sports collapse and explode in a massive fireball. And so, I have built a scenario for that vision, one I can root for.

First, an updated review of the landscape as of Saturday night. Several reporters I trust have posted recent key developments:

• Dennis Dodd of CBS Sports reported that Oregon and Washington have been informed that the Big Ten is sitting tight for now and is waiting on Notre Dame to decide whether it also will join the B1G.

• Scott Dochterman of The Athletic inferred quite logically that FOX is not at all interested in a new B1G West division that would impede USC and UCLA from playing Big Ten East powers Ohio State, Michigan and Penn State more than once every four years. The TV folks want the big-ratings splash games as often as possible.

• Influential Portland radio host John Canzano, formerly of OregonLive, wrote an open plea to 84-year-old Nike founder and generous Oregon Ducks benefactor Phil Knight to save what’s left of the Pac-12 by encouraging a proactive raid of the Big 12, surmising quite logically that it’s one conference or the other that will survive. I say, maybe neither, but that’s another story.

• Sports Illustrated‘s Pat Forde suggested that, if we’re really in uncharted fittest-survival mode, what’s to stop these budding super-conferences from jettisoning unwanted baggage, schools that have never pulled their weight financially like Purdue and Minnesota and Vanderbilt and Mississippi State?

It’s chaos out there, every league and school for itself. There are no rules anymore. It’s an Ayn Rand biosphere. And thanks to the body snatching of the SEC and B1G by Disney and FOX and hatching of its larvae inside college football, only one asset matters. It’s not tradition or collegiality or rivalries or bands or any of the other faces we’ve always loved about college sports.

It’s about money. Only money.

Here are the architects of this takeover. Take a good look at them. They are most responsible for what’s happened to your campus games. Jimmy Pitaro, president of ESPN. Mark Silverman, president of FOX Sports. The former greased the skids for Texas and Oklahoma joining the Southeastern Conference and leaving the Big 12 in ruin. The latter headed up Southern California and UCLA bolting for the Big Ten and leaving the Pac-12 adrift and very likely irrelevant.

This super-league concept is what the money men of European soccer tried to do to the Premier League. It didn’t happen because the fans there who love the game – even many who wear powerful colors of Chelsea blue and Manchester red – stuck up for the smaller poorer clubs of the 20 and shouted down the concept.

But something of that sentiment is missing in the United States. Because we are such a divided nation in so many ways, nobody seems to care about the welfare of anyone else. Get yours, make sure your fence line is secure and screw your neighbor! These are now the bromides of college sports.

I don’t sense that many fans of the B1G or SEC care in the slightest that the landscape beyond their ever-growing footprints is being scoured. That the plucky underdogs of Iowa State and Oregon State and, yes, now Pittsburgh, are vulnerable to being washed away by a tidal wave of unchecked greed.

My hope is this: That the incompetent Peter Principle “leadership” of Kevin Warren is exposed again. That this FOX money grab will blow up in the Big Ten’s face when all the athletes at USC and UCLA begin to realize what they’ve been lassoed into: 12-hour-minimum weekly excursions in airports and planes to and from slate-colored, stratus-clouded upper Midwestern and Eastern outposts. I am hoping for an out-and-out rebellion, that recruiting craters at the Los Angeles schools because word of mouth spreads – you don’t wanna do this, man. It’s brutal.

These are two regional cultures that do not belong together. They are both beautiful in their own rights – the diligent windswept plainsmen of the Cornbelt and the flamboyant sun-kissed sons of SoCal. They have zero in common. And what the profiteers of telecasting don’t get is, a league must have a culture in common. It’s not merely a division of professionals. It’s a bunch of college kids still representing a specific slice of the country.

I have a feeling this is not going to work. The network execs have no such premonition because they are soulless opportunists who only understand fiscal metrics. They are merely attempting to group the most valuable assets in the belief that they can maximize profit.

Well then, call me a spread bettor looking for a loss. I think this USC/UCLA acquisition is headed for disaster.

If Warren had the audacity of his predecessor Jim Delany, he would’ve at least gone all in on this western expansion. He would’ve seen the SEC’s Texas/Oklahoma play with USC/UCLA and raised it with Oregon/Washington/Utah to form an entirely new West division composed fully of Pac-12 members, then made a big swaggering offer to Notre Dame to make 20. If ND refuses, North Carolina is the contingency.

If you’re going to do this super-conference move, you do it big and bold and shamelessly. You give the Trojans and Bruins brothers in arms to make them feel included in their new digs. Of course, the FOX boys have already told Warren and the B1G presidents that the Ducks, Huskies and Utes don’t provide quite enough bang for the TV buck to be worth an equal slice of a diminished pie.

And I don’t think Warren has the sort of stones or vision to go against their advice. He’s going to slow play his hand like the donkey he is. And the Big Ten is going to end up with a couple of incongruous ill-fitting members with no Pacific brethren to join them. It’s going to suck for them. Actually, it’s going to suck for everybody.

And so, I’m hoping for exactly that – a giant failure so dysfunctional and chaotic that it totally implodes. That, by the end of the decade, USC and UCLA are returned in some sort of Western conference along the coast with their neighbors. And the Big Ten recedes back to the cornfields where it belongs.

That’s the thing, though, in this lawless world without borders. Nobody knows who they are anymore. They only care what they’re worth.

• Reasons for and residue of USC/UCLA bolt to Big Ten have me conflicted at best, depressed at worst.

• Had he been given a chance, Marlin Briscoe could have been a great pro QB, but he was born too soon.

• Off Topic: How a PSU academic advisor inspired Wally Richardson 30 years ago to maximize his words.