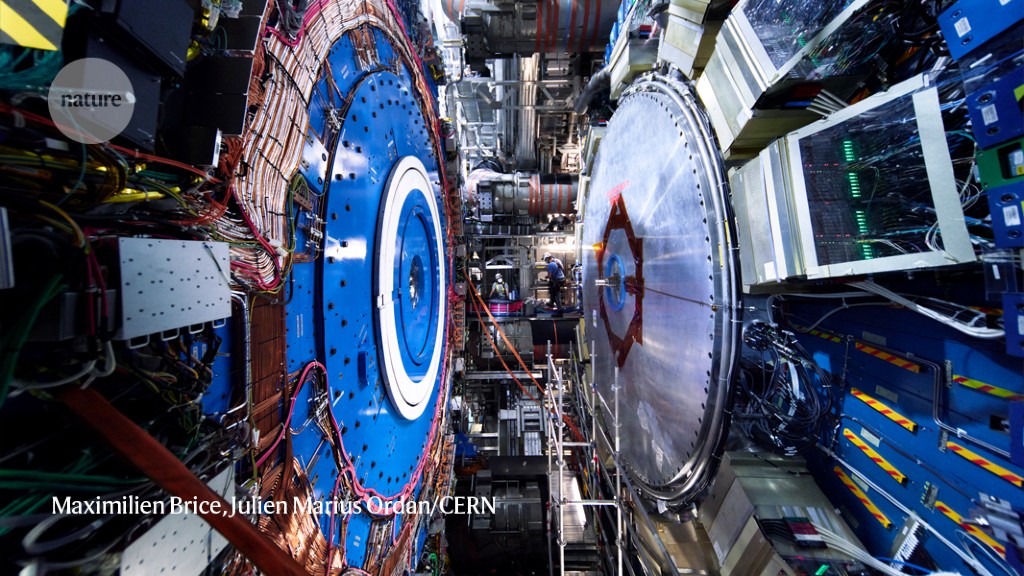 On 4 July 2012, physicists at CERN, Europe’s particle-physics laboratory, declared victory in their long search for the Higgs boson. The elusive particle’s discovery filled in the last gap in the standard model — physicists’ best description of particles and forces — and opened a new window on physics by providing a way to learn about the Higgs field, which involves a previously unstudied kind of interaction that gives particles their masses.

Since then, researchers at CERN’s Large Hadron Collider (LHC) near Geneva, Switzerland, have been busy, publishing almost 350 scientific articles about the Higgs boson. Interest, many of the particle’s properties remain a mystery.

On the ten-year anniversary of the Higgs boson’s discovery, Nature looks at what it has taught us about the Universe, as well as the big questions that remain.

Physicists expected to find the Higgs boson eventually, but they didn’t know when. In the 1960s, physicist Peter Higgs and others theorized that what’s now called a Higgs field could explain why the photon has no mass and the W and Z bosons, which carry the weak nuclear force that is behind radioactivity, are heavy (for subatomic particles) . The special properties of the Higgs field allowed the same mathematics to account for the masses of all particles, and it became an essential part of the standard model. But the theory made no predictions about the boson’s mass and therefore when the LHC might produce it.

In the end, the particle emerged much earlier than expected. The LHC started gathering data in its search for the Higgs in 2009, and both ATLAS and CMS, the accelerator’s general-purpose detectors, saw it in 2012. The detectors observed the decay of just a few dozen Higgs bosons into photons, Ws and Zs , which revealed a bump in the data at 125 billion electronvolts (GeV), about 125 times the mass of the proton.

The Higgs’ mass of 125 GeV puts it in a sweet spot that means the boson decays into a wide range of particles at a frequency high enough for LHC experiments to observe, says Matthew McCullough, a theoretical physicist at CERN. “It’s very bizarre and probably happenstance, but it just so happens that [at this mass] you can measure loads of different things about the Higgs.”

The Higgs boson is a spin-zero particle

Spin is an intrinsic quantum-mechanical property of a particle, often pictured as an internal bar magnet. All other known fundamental particles have a spin of 1/2 or 1, but theories predicted that the Higgs should be unique in having a spin of zero (it was also correctly predicted to have zero charge).

In 2013, CERN experiments studied the angle at which photons produced in Higgs boson decays flew out into the detectors, and used this to show with high probability that the particle had zero spin. Until this had been demonstrated, few physicists were comfortable calling the particle they had found the Higgs, says Ramona Gröber, a theoretical physicist at the University of Padua in Italy.

Physicists know that the standard model is not complete. It breaks down at high energies and can’t explain key observations, such as the existence of dark matter or why there is so little antimatter in the universe. So physicists have come up with extensions to the model that account for these. Discovering the Higgs boson’s 125-GeV mass has made some of these theories less attractive, says Gröber. But the mass is in a gray zone, which means it rules out very little categorically, says Freya Blekman, a particle physicist at the German Electron Synchrotron (DESY) in Hamburg. “What we have is a particle that’s consistent with more or less anything,” she says.

According to the standard model, a particle’s mass depends on how strongly it interacts with the Higgs field. Although the boson — which is like a ripple in the Higgs field — doesn’t have a role in that process, the rate at which Higgs bosons decay into or are produced by any other given particle provides a measure of how strongly that particle interacts with the field. LHC experiments have confirmed that — at least for the heaviest particles, produced most frequently in Higgs decays — mass is proportional to interaction with the field, a remarkable win for a 60-year-old theory.

The Universe is stable — but only just

Calculations using the mass of the Higgs boson suggest that the Universe might be only temporarily stable, and there’s a vanishingly small chance that it could shift into a lower energy state — with catastrophic consequences.

Unlike other known fields, the Higgs field has a lowest energy state above zero even in a vacuum, and it pervades the entire Universe. According to the standard model, this ‘ground state’ depends on how particles interact with the field. Soon after physicists discovered the Higgs boson’s mass, theorists used the value (alongside other measurements) to predict that there also exists a lower, more preferable energy state.

Shifting to this other state would require it to overcome an enormous energy barrier, says McCullough, and the probability of this happening is so small that it is unlikely to occur on the timescale of the lifetime of the Universe. “Our doomsday will be much sooner, for other reasons,” says McCullough.

More data will increase the precision of these measurements and the LHC has collected just one-twentieth of the total amount of information it is expected to gather. Seeing hints of new phenomena in precision studies are more likely than directly observing a new particle, says Daniel de Florian, a theoretical physicist at the National University of San Martin in Argentina. “For the next decade or more, the name of the game is precision.”

Does the Higgs interact with lighter particles?

Until now, the Higgs boson’s interactions have seemed to fit with the standard model, but physicists have seen it decay into only the heaviest matter particles, such as the bottom quark. Physicists now want to check whether it interacts in the same way with particles from lighter families, known as generations. In 2020, CMS and ATLAS saw one such interaction — the rare decay of a Higgs to a second-generation cousin of the electron called the muon1. Although this is evidence that the relationship between mass and interaction strength holds for lighter particles, physicists need more data to confirm it.

Does the Higgs interact with itself?

The Higgs boson has mass, so it should interact with itself. But such interactions — for example, the decay of an energetic Higgs boson to two less energetic ones — are extremely rare, because all the particles involved are so heavy. ATLAS and CMS hope to find hints of the interactions after a planned upgrade to the LHC from 2026, but conclusive evidence will probably take a more powerful collider.

What is the Higgs boson’s lifetime?

Physicists want to know the lifetime of the Higgs — how long, on average, it sticks around before decaying to other particles — because any deviation from predictions could point to interactions with unknown particles, such as those that make up dark matter. But its lifetime is too small to measure directly.

To measure it indirectly, physicists look at the spread, or ‘width’, of the particle’s energy over multiple measurements (quantum physics says that uncertainty in the particle’s energy should be inversely related to its lifetime). Last year, CMS physicists produced their first rough measurement of the Higgs’ lifetime: 2.1 x 10−22 seconds2. The results suggest that the lifetime is consistent with the standard model.

Are any exotic predictions true?

Some theories that extend the standard model predict that the Higgs boson is not fundamental, but — like the proton — is made up of other particles. Others predict that there are multiple Higgs bosons, which behave similarly but differ, for example, in charge or spin. As well as checking whether the Higgs is truly a standard-model particle, LHC experiments will look for properties predicted by other theories, including decays into forbidden particle combinations.

Physicists are just at the beginning of their efforts to understand the Higgs field, whose unique nature makes it “behave like a portal to new physics”, says de Florian. “There is a lot of room for excitement here.”