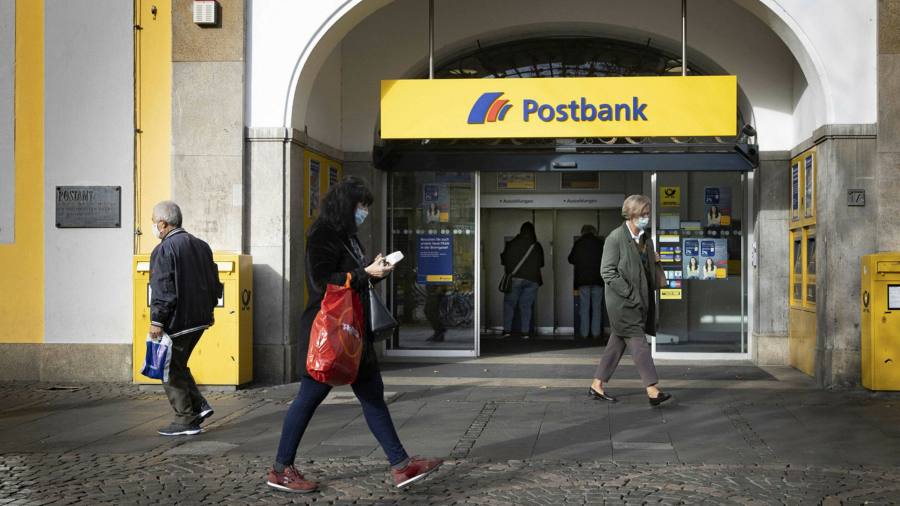 Deutsche Bank has suffered delays and cost overruns on the integration of two IT systems, threatening a pillar of chief executive Christian Sewing’s turnround plan for Germany’s largest lender.

A projected months-long delay to combine its German retail unit Postbank with other domestic operations is set to cost €70mn and put back the start of a budgeted €300mn of annual savings, according to three people familiar with the matter.

Executives have reluctantly postponed the long-planned full migration of Postbank’s IT infrastructure to the systems used by its own-brand German retail operations to 2023.

The project — codenamed Unity — has proved far more complex than anticipated and managers are not ready to risk bungling the transfer of sensitive client data, according to the people familiar with the matter.

External IT service providers — who had been informed of their contracts would not be renewed beyond extend 2022 — have now been asked to their work. They have taken the opportunity to charge significantly more to do so, two of the people said.

Deutsche acquired domestic retail rival Postbank in stages between 2008 and 2010 and since then it has proved a constant problem.

The initial IT integration project — named Magellan, after the Portuguese explorer — was ditched after five years and Postbank was put up for sale, but failed to find a buyer.

The new Postbank woes raise questions about the bank’s previous communications, which consistently stated that its restructuring was on track. “We are where we want to be,” Sewing said in January, stressing that the bank kept its promises to investors despite a tough environment.

The delayed integration of Postbank has increased the pressure on Deutsche’s deputy chief executive Karl von Rohr, who is in charge of retail banking and asset management. Von Rohr was under scrutiny already over his handling of the greenwashing scandal at subsidiary DWS.

The slimming-down of Deutsche’s lacklustre retail unit was one of the critical parts of Sewing’s “Compete to Win” restructuring programme. When Von Rohr was put in charge of the unit in July 2019, Deutsche announced that the retail bank would cut €1.4bn in costs by 2022, with €300mn of the reduction coming from switching off Postbank’s IT infrastructure. So far the bank has realised €900mn, and says the full €300mn of Postbank-related synergies will only be generated by 2025.

Owing to persistent problems with the migration of client data, the bank decided this May to extend the deadline at least until mid-2023, according to people familiar with the matter. At the time, the bank had only managed to migrate 4mn Postbank clients who use simple savings products.

The migration of the remaining 8mn Postbank clients — among them those who use current accounts, credit cards or brokerage services — has been pushed back into the second quarter of 2023.

Internally, people involved in the project are already concerned that the new timetable may still be too optimistic. One challenge is that certain data, which is tax-sensitive, can only be migrated once per year in late December. Should Deutsche miss the next turn of the year, it would have to wait another 12 months. “Autumn will be tough,” this person said.

Moreover, more successful units within Deutsche bank fear they might have to shoulder the additional costs triggered by the delayed integration of Postbank; from 2015 to 2018 the unit was headed by Sewing himself.

Bank IT data transfers are notoriously hard to execute. After it was bought by Spanish lender Sabadell, UK high-street lender TSB was plunged into turmoil in 2018 when an attempted switch to its new owner’s system left its customers unable to access their accounts, costing it more than £350mn and leading to a string of senior departures and regulatory sanctions.

Deutsche Bank confirmed delays but said the “duration of the project” had been extended by just three months, adding that it was “still scheduled to be finished in 2023”.

The adder added that part of the reason was a 2021 ruling from Germany’s highest court, which had created additional work for the retail division. Deutsche declined to comment on the cost increases, but stated that the retail unit had “significantly contributed to the profit improvements in ability and efficiency in the overall bank.”