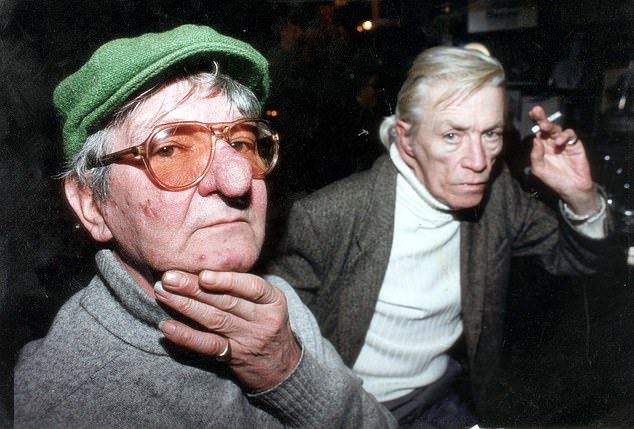 Back in the late 70s and early 80s, I was a member of the Colony Room Club in Soho.

The Colony — or Muriel’s, as it was also known — was a cramped, seedy place, untouched by sunshine or fresh air, but it served its purpose as an afternoon drinking club, populated by ne’er-do-wells.

Burglars rubbed shoulders with actors and artists, and anyone who ventured inside had to be prepared to be verbally abused by the razor-tongued proprietress, Muriel Belcher, and her equally abrasive assistant Ian Board, who took over when she died.

The great Barry Humphries recalled the club’s curious magnetism. ‘What did that ogress and her malevolent elf Ian use to entice us to that infernal club? As she grew even uglier and he transformed from lah-de-dah rent boy to a booze-bitten queen with a strawberry nose, we still climbed those fateful stairs.’

By far the most famous regular was the painter Francis Bacon, who would stand by the bar in his tight-fitting leather jacket, generously dispensing champagne to the assorted rogues and roues. Bacon seemed to enjoy the insults that used to fly back and forth, and the club’s clammy air of decadence. ‘I wouldn’t like living in the country,’ he once boomed, ‘because of all the HORRIBLE LITTLE APPLE TREES there.’

The Colony Room Club lost its purpose in the late 1980s, when the licensing laws changed and the surrounding pubs were allowed to stay open throughout the afternoon.

Pictured: Muriel Belcher’s abrasive assistant Ian Board (left), who took over when she died, and Jeffrey Bernard at the Colony Room Club in Soho

Now, 14 years later, one of London’s most luxurious hotels, The Dorchester, has just announced plans to recreate the Colony Room Club for its well-heeled clientele.

‘People will be able to relax, drink and chat as they soak up the history,’ boasts the hotel’s advisor on the project, Darren Coffield. ‘It will be Britain’s only fully functioning art installation — although after a few hours of soaking up the atmosphere some of the visitors might find their impaired functions.’

But how authentic will it be? The gap between the two cultures seems to me to be unbridgeable.

The contents of the original club were sold or thrown away when it closed, so The Dorchester is having to recreate its interior from scratch. So far the management have not said if they will be drenching the carpet in cigarette ash, alcohol, vomit and urine, though this would certainly be the simplest way of ‘soaking up the atmosphere’.

The Dorchester currently promises its well-heeled clientele a ‘delicately classical style’ with ‘noble grandeur’. Its priggish terms of admission could not be in sharp contrast to the boozy anything-goes atmosphere of the original Colony.

On its website, the Dorchester asks its guests to ‘please be considerate of our other guests and do not be noisy or cause a nuisance’. It also states, bossily, that ‘your behaviour, appearance and sobriety must be of a standard approrate to the Hotel’s standing’.

Club regular: George Melly at The Colony Room in London

Among the many prohibitions for guests of The Dorchester are ‘any form of verbal or non-verbal conduct which could be regarded as violent, bullying or intimidatory behaviour’, and ‘taking any step or committing any action which may damage the moral standing or reputation. of the Hotel’.

Come again? I find it hard to recall any member of the Colony who ever behaved appropriately. Those who were not noisy were nuisances, and those who were not nuisances were noisy. Most aspired to be both at the same time. Bullying and intimidatory behavior were mandatory, particularly from the proprietors.

Soho chronicler Christopher Howse recalls seeing Ian Board turning on Francis Bacon one afternoon. “You can’t f***ing paint!” yelled Ian Board in a voice like a cheese grater as he grabbed an umbrella hanging from the back of his stool and started to belabour the artist about the shoulders as he left by the dark, precipitous twisting stairway, with a volley of ballpoint pens bouncing off his leather-clad back.’

Who would ever have thought the Colony Room Club could be part of The Dorchester? It all goes to show that, in Britain, it only takes a few years before outsiders turn into insiders, seediness becomes monetised, and rebellion is transformed, as if by magic, into heritage.