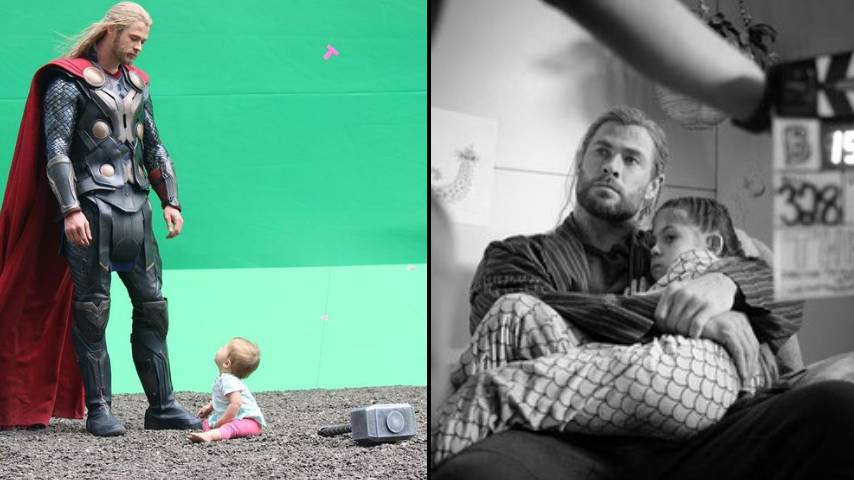 Chris Hemsworth has shared two of the most heartwarming pics you’ll see this week as his daughter is pictured 11 years apart on the set of the first and fourth Thor movies.

In the caption of his latest Instagram post, Hemsworth wrote: “‘Here’s two pics of me and my daughter.

“One was the first time she was on set 11 years ago, the other is the most recent on Thor: Love and Thunder. She’s my favorite superhero.”

The first snap of his daughter is a throwback showing India visiting her Daddy on the set of the first Thor film as a baby. She is pictured looking up to her father, who’s in full costume, in front of a green screen.

The second pic then shows India cuddled up in her father’s arms on the set for the latest flick almost ten years later.

One fan commented: “This is adorable oh my gosh,” while a second added: “aww how cute ARHHHH.”

A third wrote: “This is the sweetest picture ever,” and another penned: “So adorable. I loved seeing her in the film, it made the ending 100x better.”

Someone else added: “Jesus I did not know that was your actual daughter.”

Well, as the long awaited Thor: Love and Thunder hit our screens last week, the ratings have suggested that the film may have not quite lived up to expectations.

The film received one of the worst Rotten Tomatoes ratings in the entire Marvel Cinematic Universe (MCU), as the TOMATOMETER, which consisted of 335 reviews, gave the movie 67 percent, at the time of writing.

The score is not great when you compare it to other movies in the MCU – Thor: Love and Thunder scored the same as The Incredible Hulkwhich received 67 percent, followed by Thor: The Dark World, which earned 66 percent.

Notably, it didn’t do as bad as sitting at the bottom of the ladder is Eternals, which scored 47 per cent.

However, Thor: Love and Thunder well and truly brought the hammer down when it came to the opening weekend numbers.

The film broke its own ‘Thor’ record by earning $143 million in its opening weekend in North America, according to studio estimates.

That being said, I’m sure the cast aren’t too bothered about the opinions of 335 people.