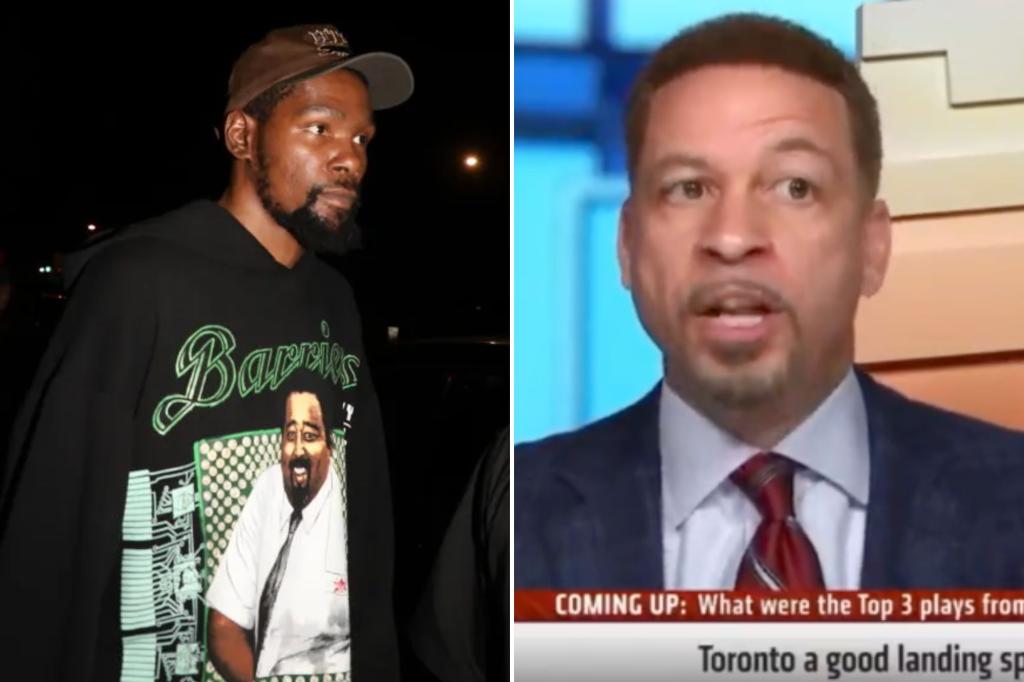 Chris Broussard made a controversial claim as to why Kevin Durant would not want to play for the Toronto Raptors.

Speaking on FS1 on Monday, Broussard explained that he believed race would play a role.

“I don’t think KD will want to go to Toronto,” Broussard said. “I’ve visited there many times, covering the league. Great city. But, it’s not America. And you feel it when you’re there. I’m telling you, especially as an African-American. It’s a different situation than African-Americans are used to being in. I’ve talked to people in that organization pre [GM Masai] Ujiri about, can they keep African-American superstars there?”

Durant asked for a trade from the Nets last week, and the Raptors have been one of the teams rumored to have a plausibly competitive trade package for the superstar.

In the TV segment, Broussard proceeded to say that Tracy McGrady, Vince Carter and Chris Bosh all left the Raptors.

“I don’t think KD would be happy there, and that would be a problem,” Broussard said. “That’s why, do Masai Ujiri’s credit, he’s made them an international team. The best players they have tended to be the international guys, or guys like DeMar DeRozan and Kyle Lowry who aren’t superstars.”

The reaction, particularly from Canadian media, was sharply negative towards Broussard.

“Tell me you know nothing about Toronto…or KD…or need to badly reach Caribana one time. One of the worst takes,” tweeted Donovan Bennetta host for SportsNet in Canada.

“Toronto … literally named the most diverse city in the world,” tweeted Kel Wrightwho makes content for the Memphis Grizzlies.

Rondae Hollis-Jefferson, who played one season for the Raptors, also spoke out against Broussard.

“Yeaaaa this a stretch… Canadians love you like you grew up there… he’s tripping,” Hollis-Jefferson tweeted.

After the clip went viral, Broussard clarified the remarks.

“I never said Blacks are ‘treated worse in Toronto’ than in America. Never!” Broussard tweeted. “That’s ridiculous. I said living there is different and ‘not the same as living in America for Blacks.’ Very diverse city. But just 8% Black. I love visiting Toronto. Visiting.”

After the tweet, there were people who pointed out that, according to the most recent US Census, Phoenix is ​​7.1 percent black; the Suns were reportedly on the wishlist of teams where Durant would prefer to be sent in a trade from the Nets.