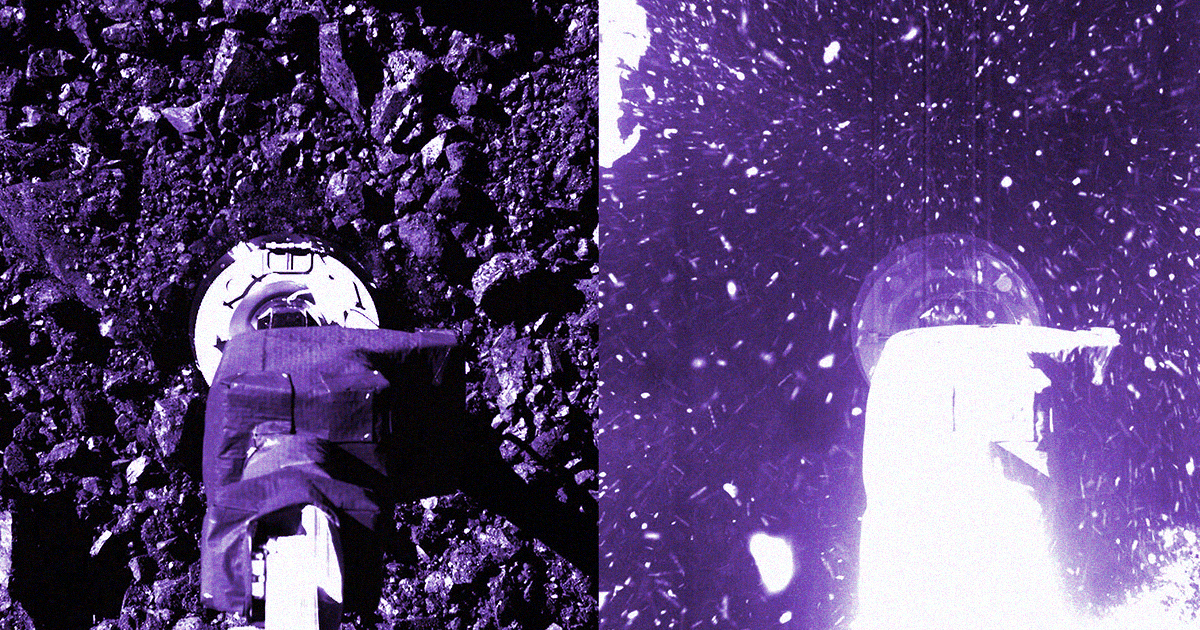 “The surface was soft and flowed away like a fluid.”

NASA’s OSIRIS-REx spacecraft’s original mission was to fly to the asteroid Bennu, where it was meant to briefly land on the body’s presumably rocky surface, collect a small sample, and head back home.

But while most of the mission miraculously went as planned — there was one major surprise along the way.

When OSIRIS-REx tried to touch down on Bennu back in 2020, it astonishingly sank into the asteroid’s quicksand-like surface — likened to a children’s “plastic ball pit” in a new NASA update — triggering a dazzling explosion of celestial matter.

Now, the mission’s researchers finally think they know why, as detailed in a pair of new papers published this week.

“We expected the surface to be pretty rigid, kind of like if you touch down on a gravel pile: a little bit of dust flying away and a few particles jumping up,” Dante Lauretta, lead author of one of the studies and principal investigator of the OSIRIS-RE mission, told Space.com. “But as we were bringing back the images after the event, we were stunned.”

“There clearly was no resistance whatsoever,” she added. “The surface was soft and flowed away like a fluid.”

The outcome was so surprising, in fact, that the researchers sent the craft back to Bennu six months later. The imagery gathered on the second mission showed that OSIRIS-REx had left a 65-foot-wide impact crater, dubbed “Nightingale,” in its wake.

According to a NASA statement, the researchers believe that the secret to Bennu’s unexpected fluff is in its mass. The particles that form the planet’s surface are both loosely packed and lightly bound, meaning that while it looks solid, there’s actually a lot of empty space.

As a result, NASA says that stepping onto the planet would apparently feel like “stepping into a pit of plastic balls.” Yes, like the ones at your local Chuck E. Cheese.

The research is exciting, although frankly, it’s a bit nerve-wracking as well. Since Bennu is held together by so little force, an impact with Earth would likely cause the asteroid to shatter within our Pale Blue Dot’s atmosphere, according to the researchers — a very different kind of hazard compared to a collision with a hard celestial body.

More on NASA advancements: Here’s What to Expect From James Webb’s First Images