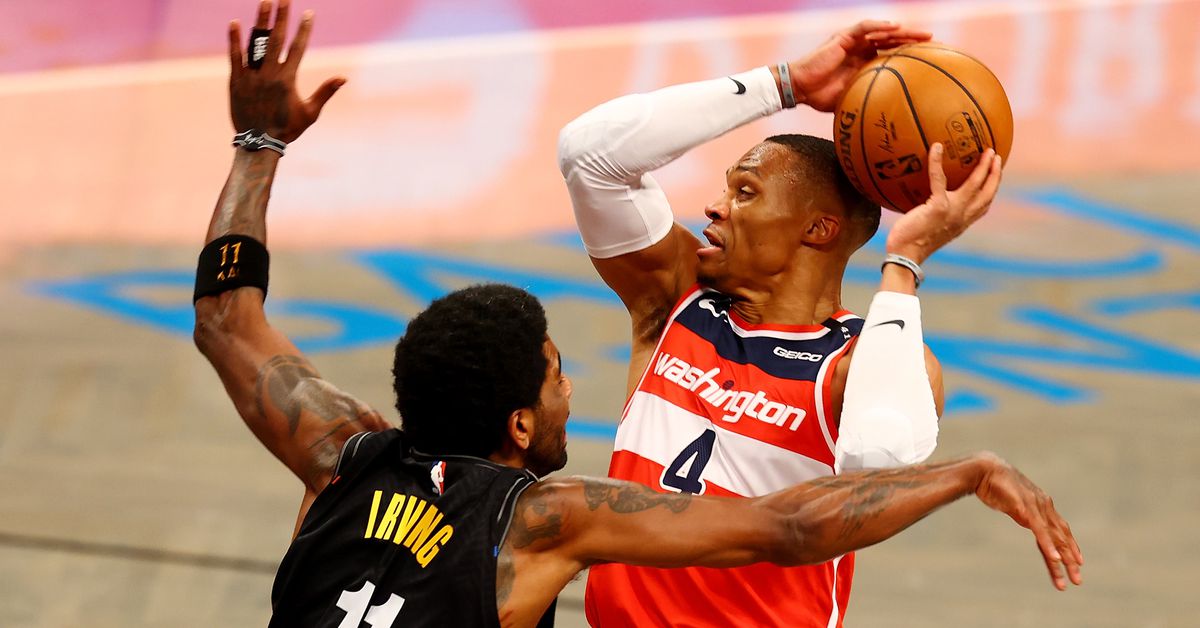 Chris Haynes of Yahoo! Sports reports Sunday that the Nets and Lakers are “actively engaged” in talks that could send Kyrie Irving and Joe Harris to the Lakers for Russell Westbrook and draft compensation.

There’s palpable optimism that an agreement can be struck between the two sides this offseason, but there remain a few hurdles, sources said.

However, while the LA-based Haynes wrote that there’s “palpable optimism,” he also quotes sources with the Nets as saying talks “have only been preliminary.” Moreover, Alex Schiffer of The Athletic said on ESPN Radio that he’s been told the report is not accurate.

Schiffer also tweeted how trying to run an offense through two non-shooting guards like Westbrook and Ben Simmons would never work.

The guy on the right is why a deal for the guy on the left makes no sense. An offensive genius like Mike D’Antoni could not scheme an offense around two non-shooting point guards like these two. https://t.co/c8Zt7lyURy

The report also flies in the face of various other reports that the Nets will not move on Irving trade scenarios till after a trade for Kevin Durant is complete.

This is the second time in two days that a deal centered on Irving and Westbrook has been discussed online.

On Friday morning, Legion Hoops reported there were discussions between the two teams…

SOURCE: The Lakers are working aggressively on a deal for Kyrie Irving — their current offer is Russell Westbrook, Talen Horton-Tucker, and their 2027 1st-round pick. Joe Harris could be headed to Los Angeles in the deal. pic.twitter.com/oRAjIPMj3f

Haynes said the sticking points include the extent of draft compensation and whether Harris, who’s due to make $38 million over the next two years, would be included.

The Lakers have been disinclined to the inclusion of Harris, and are instead seeking the insertion of sharpshooter Seth Curry as part of the arrangement, sources said.

Curry is on an expiring $8.5 million deal.

Westbrook will make $47.1 million this season the final year on his five year, $205 million deal signed while he was with the Thunder back in 2017.. That’s $10+ million more than Irving who opted in to his $36.9 million player option this week.

According to reports, the Nets are willing to deal Irving to LA — his preferred landing spot — as long as it doesn’t add to Brooklyn’s financial commitments next season. A deal that included Harris would decrease the Nets payroll by roughly $8 million.

Of course, including Harris, a favorite fan and the player with the most time in black-and-white, could indicate the Nets are in a deep rebuild, cutting salary — and luxury taxes — while also building up its stock of draft picks. One counter point to that scenario, however, is that the Nets added $9.2 million to its payroll on Thursday when they traded a first round pick to Utah for Royce O’Neale.

Haynes said nothing is imminent.

The Nets are not expected to be rushed into a deal and will continue conversing the complex specifics with the Lakers on an Irving-Westbrook swap.