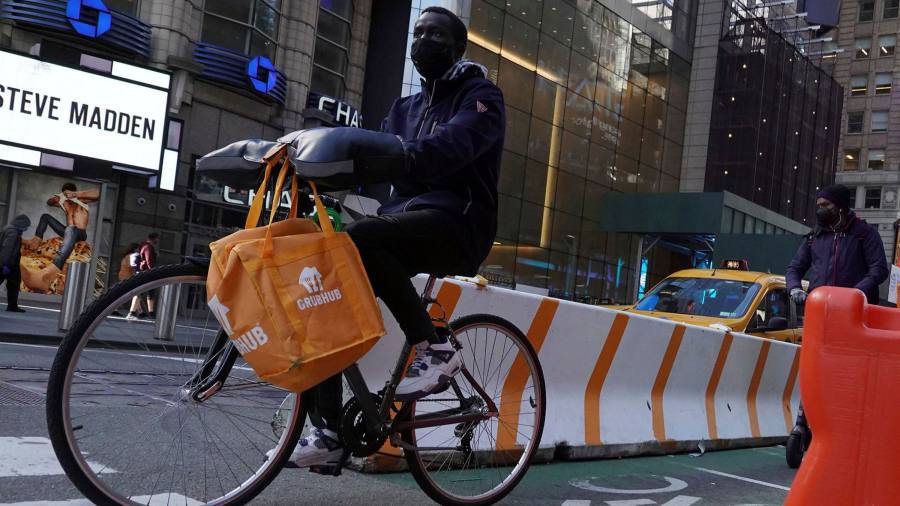 Amazon has agreed a deal that could end with it taking a 2 per cent stake in Grubhub, the US business of Just Eat Takeaway, as part of a wider agreement with the online food delivery group.

The agreement would give Amazon Prime users in the US a one-year membership to Just Eat’s Grubhub subscription service, essentially offering free food delivery on minimum orders, the Amsterdam-based company said on Wednesday.

The deal gave a boost to JET, one of the world’s largest operators of food delivery apps. The group has lost more than half its market value this year as it grapples with a slowdown in growth and criticism from investors over last year’s $7.3bn purchase of Grubhub.

Under the deal, Amazon’s stake in Grubhub could rise to 15 per cent, contingent on a minimum number of new customers being delivered via the Prime agreement.

JET said it would continue to actively explore the partial or full sale of Grubhub. The company announced plans to sell the US-based business in April following months of investor pressure.

Grubhub, which has been profitable in the past, has recently faced intense competition from US companies with their own delivery networks such as DoorDash and UberEats.

“You’ve got Just Eat Takeaway under duress, really struggling to transition from being a Dutch-led online takeaway business to being a global player,” he added.

It comes after a difficult year for JET. In May, it revealed it was investigating a complaint against one of its top executives and that its chair was stepping down following shareholder pressure.

The agreement comes after Amazon made a similar deal last September with UK-based rival Deliveroo, offering Prime users a year of unlimited free deliveries on the platform, in an attempt to expand its suite of Prime services. It owns roughly a 12 per cent stake in Deliveroo. Amazon closed its own restaurant delivery service in the UK in late 2018.

Adam DeWitt, Grubhub’s chief executive, said in a statement: “Amazon has redefined convenience with Prime and we’re confident this offering will expose many new diners to the value of Grubhub+ while driving more business to our restaurant partners and drivers.”